Are Wireless Gaming Headsets Worth It? 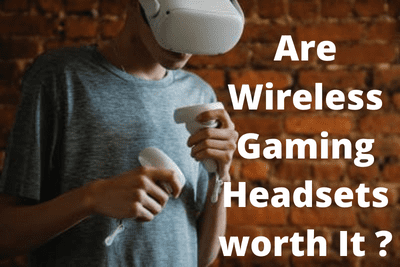 Remember when mobiles got invented for the first time? I don’t either. It makes sense because I was too young to remember. And then, touch screen mobiles got introduced. That hype, I remember. The convenience level just went up to another level. But when it became mainstream, it got pretty mundane.That is what happens to every invention.

The same is the case with wireless gaming headsets. Yes, they are super convenient; I never denied that. But that is all there is to it, convenience.Wireless technology is not a natural improvement over wires. It just takes a different approach.Regarding that, I’ll be highlighting every point that would help you come up with an answer to if wireless gaming headsets are worth it.Hopefully, by the end of this article, you’ll know which type of gaming headset fits you satisfactorily for your gaming needs.

Unless and until you are well informed about the different wireless connection kinds, you won’t get to decide if buying a wireless gaming headset is right for you. First off, NOT ALL WIRELESS GAMING HEADSETS UTILIZE THE SAME WIRELESS TECHNOLOGY. I had to capitalize it to make it even more prominent, although it doesn’t look good, I know.

In the case of modern wireless gaming headsets, you have two possibilities;

1: the wireless headsets can either utilize Bluetooth

Bluetooth is budget friendly and also provides the support of any Bluetooth-enabled device. (I always focus on the good parts of others. So, I will apply the same rule to gaming headsets. But I am honest too, so stay tuned). The benefits that come with Bluetooth come at the price of lower sound quality and a shorter range. The 2.4 gigahertz wireless is the total opposite. Headsets using this wireless technology;

Why go for a 2.4 gigahertz wireless headset?

If you intend to utilize the headset exclusively on your PC, the 2.4 gigahertz wireless gaming headset is the best pick for you with the best sound quality. That was about the wireless gaming headsets of different kinds you can choose from and why. Let’s come to the battle between wired and wireless headsets. It is a well-known debate among gamers and is on trend.

Is it better to use a wired or wireless headset for gaming?

Honestly, neither is superior. It all comes down to preference. But if I have to speak in general terms, the wired headset is a better pick for PC gaming. If nothing else, they are much more cost-efficient. One other plus point of wired headsets is that they support much higher bit rates than wireless connections. That is the key when it comes to better sound quality.

But it can be a nuisance to manage them for sure. Contrary to that, wired headsets are expensive but convenient. Again, it all depends on you.