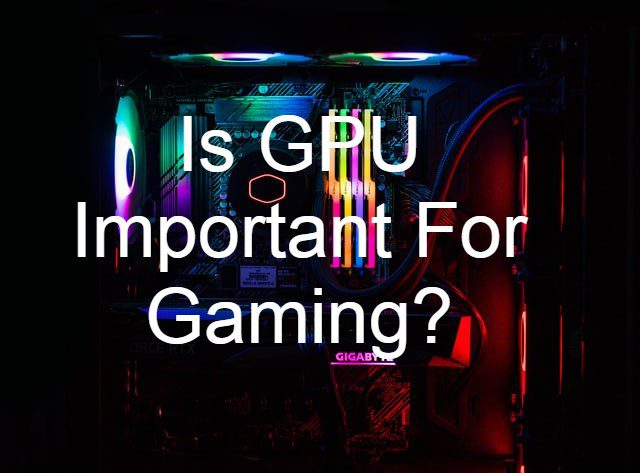 Gaming is a cumbersome task. Well, at least for professionals and for the computer itself. A lot of components are involved in making up the entire system, GPU being one of them. But is GPU important for gaming? If so, then why? Can’t a good CPU take the load on its own?

Well, no, that is not true, and certainly not for many games. So let’s dive into the importance of GPU for gaming.

There are a few types of graphics processors out there, but the primary purpose is to accelerate the rendering of graphics. Unlike CPUs, GPUs are capable of processing a large amount of data in parallel, making them useful for a wide variety of machine learning, video editing, and gaming applications.

It is widely known that the GPU is an essential component of a gaming device, and in many instances, it is more important than the CPU when playing certain games. In simpler terms, a GPU is a single-chip processor primarily used for managing and enhancing video and graphics performance. These are extremely important for effective gaming.

According to many PC gamers, the GPU is the most critical component for gaming on PC. This is because the GPU is responsible for rendering the images, scenes, and animations that the player sees. The large majority of today’s fast-paced games are extremely demanding when it comes to the type of rendering power that the GPU can provide. Furthermore, these games are designed to take advantage of the multi-core capabilities and increased thread count capabilities provided by the newer generation of CPUs.

Powerful, fast GPUs are required to process 2D and 3D graphics, render polygons, map textures, and more. You will get more frames per second if your graphics/video card (GPU) can process information faster.

For Call of Duty: Black Ops 4, for example, the recommended graphics are the NVIDIA GeForce GTX 970 4GB, GTX 1060 6GB, or Radeon R9 390/AMD RX 580. All of these are mid-range graphics cards that can handle full HD gaming in 1080p and run games with medium or high settings at higher resolutions.

Q: Should I upgrade GPU or CPU?

Ans: If you’re a gamer or video editor, or your GPU has been around for more than four years, you should upgrade your GPU first. Some people recommend upgrading the CPU first because it’s less expensive, more durable and controls all aspects of the system, besides graphics.

Is a CPU or GPU more important for gaming?

Ans: The graphics processing unit (GPU) is designed to process graphics instruction faster than a CPU, which is why most game consoles rely on GPUs instead of CPUs to render images. Although GPUs execute instructions faster, they also use more power because they process instructions at a faster rate.