Why Do Pro Gamers Use Wired Headphones? 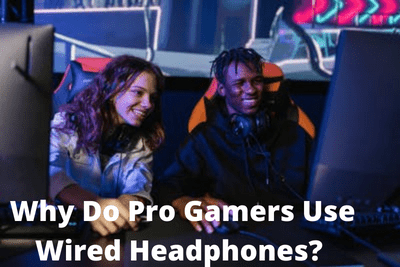 Well, because they are a pro. Nevermind. Greetings from pro gamer Ayesha behind the screen typing in an extremely sleep-deprived condition. You must be familiar with me, who is so in love with her gaming capability. If not, I hope this article turns out to be a worthwhile intro.

What do you require to win?

A win depends not solely on your skills and practice but the type of headphones you pick. Without further delay, it is time to answer why pro gamers use wired headphones when they also have the option of going for wireless ones.

Are upgraded versions supposed to be better in every way?

Although wireless headsets are an upgraded version of wired headsets, and each has its pros and cons, wired headphones are popular among gamers for good reasons.

You do not have to be concerned about recharging the batteries midway when gaming. Your only attention should be on the game instead of being split into multiple issues. Focus is the key to attaining victory in competitive games. You better not get distracted.

What makes a gaming headset better than having an affinity with multiple devices? Well, the sound quality and other aspects matter too, but compatibility is one of such aspects and has incomparable importance (of its own).

The 3.5-millimeter jack is a versatile audio connection type operated on devices comprising PCs, monitors, tablets, consoles, and other devices.

Wireless headsets undergo a procedure called encoding audio data that generates signal interference. It can induce sound distortion and some latency as well.

What happens if audio clarity suffers?

You lose the game.I mean, imagine being a first-person shooter and not hearing the footsteps of your enemy.

Sometimes audio clarity can be more important than sound quality; it depends on the kind of game you are playing. You will be in massive disfavor if you fail to hear what is going around you in the game.

No signal interference in wired headsets

Wired headphones are more dependable in this regard. Since there is no signal interference to agonize about, you won’t be mistaken about what you hear.

Wired headsets are more reasonable because of their uncomplicated design and use of older technology. Wireless headsets use more evolved technology to transmit and receive and need a dongle to function. I hope it is clear by now why most gamers choose wired headsets.

How Far Should I Sit From The 32-Inch Monitor?

Are Wireless Gaming Headsets Worth It?