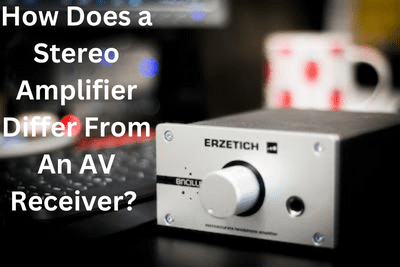 Manufacturers bog down users with confusing terminology and jargon; such jargon frequently perplexes customers. A helpful illustration of this is the Amplifier and AV Receiver. At times, they appear to be interchangeable terms; however, some distinctions will be the highlight of this article. It will hopefully help you distinguish between them and guide you in choosing the right one for your application.

How can you define an Amplifier?

As the name indicates, it is an appliance to intensify an incoming signal to drive the speaker output. For clarity, let’s cling to the depiction of the amplifier first in simpler words.

What is the primary role of an amplifier?

There are no controls of any kind in an amplifier. Its primary operation is to take an incoming audio signal from the source and amplify it for a speaker to produce sound. For any speaker to function/play, an amplifier is a must.

What about a receiver?

A receiver receives or gets numerous sources, takes care of the routing, and even intensifies the signal for speaker connectivity. There exist two preceding variants; the stereo receiver and the AV (Audio/Video) receiver.

They pack the capability to amplify only audio signals with other functionalities such as volume control, multiple stereo inputs, speaker/source selection, and also a radio tuner in some models. Obtaining a stereo receiver is one of the most manageable modes to get your sound system up.

An AV receiver is the electronic element that maintains and operates your home theater experience. It takes in both; audio and video signals from diverse sources and routes them to their outputs.

Also Check Out: Best Amplifiers Under $500

For instance, if you have linked a Blu-ray player to an AV receiver through HDMI, the AV receiver transmits the video signal to the corresponding display and the audio signals to the linked speaker system.

What is the similarity between the two?

It is significant to recognize that both stereo and AV receivers retain amplification capabilities. In easier words, amplification is an operation both kinds of these home theater electronics offer.

People expect AV receivers to be more costly than regular amplifiers, but the truth is that you can have expensive stereo amps and very cheap receivers. It depends on how well a buyer researches before opting for something.

Who should go for a Stereo receiver?

Audiophiles, Music Lovers, Vinyl & Hi-Fi enthusiasts, or Users looking for a simple stereo setup for high-fidelity listening can opt for a stereo receiver.

Who should go for an AV receiver?

Movie buffs, gamers, or users looking for a multichannel surround-sound home theater experience or general-purpose entertainment can opt for AV receivers. That is all for the difference between a stereo amplifier and an AV receiver.

What Does An Amplifier in Audio Equipment Exactly Do ?