Do Professionals Use DSLR or Mirrorless? 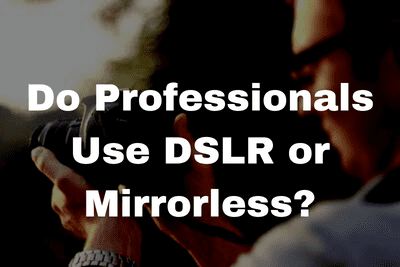 There are a lot of professionals still using DSLRs over mirrorless. Mirrorless has been a huge huge thing and it has been just growing year over year right but it is still not grown fully. Let’s just say there are still a lot of professionals using them. But when I say a lot of them are still using it, that does not imply that mirrorless is not being used. It is just that they are on equal terms when it comes to rivalry and usage, so I can not generalize and say that one is being used more than the other by professionals. In the end, it depends on the photographer; the one using the camera, not the camera itself.

Anyways, let’s blast away some of the myths and misinformation that’s out there.

Sure when mirrorless cameras came out years ago the best full-frame centers could only be found in larger heavier old-school DSLR bodies. Not anymore. Sony’s awesome Alfa a7 line packs one of the best full-frame sensors available into an interchangeable lens camera.

When you reduce the size, you reduce the amount of space you have for batteries. In the case of a mirrorless because the idea is to create a much smaller camera body with that beautiful full-frame sensor you will often find as much as 50% less battery time. Top-end mirrorless cameras come with two batteries and look, it is pretty easy to change out of battery but we wanted to give you the heads up so you will know to keep it with you when you are on that once-in-a-lifetime nature adventure or just shooting the kids in the park.

Recommended Article: Why Are People switching from DSLR to Mirrorless?

This is another hotly debated topic that’s been raging on internet forums since mirrorless cameras were first introduced. The key difference is that DSLR auto-focusing directs light using a mirror to a dedicated AF sensor or autofocus sensor for quick focus locks. In mirrorless, the light passes directly to a sensor that processes both imaging and autofocus. Now in the past years, beardless cameras have caught up with technologies.

I gotta say false for this one

A bigger camera is a better camera

If you got a great sensor in a camera that has lots of lens options for a great class, there is no benefit to having a larger camera that flanges back distance or the distance from the lens mount to the sensor is larger for DSLRs because they have to stuff the mechanical mirror assembly between the lens and the sensor. Mirrorless cameras can be smaller, lighter, and easier to carry because they don’t have to pack that moving mirror.

Is Mirrorless Camera Worth Buying?

What are the Advantages and Disadvantages of a Mirrorless Camera?