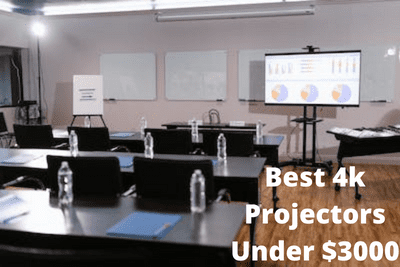 Today we’re going to talk about choosing a projector. You are aware of 4k projectors very well; hence you are here. But there is one thing people miss sometimes. When picking a projector, you should evaluate three kinds in particular. There are three kinds of buyer home theater projectors;

So L-cos projectors are the most costly option beginning in the 3,000range, but they deliver exceptional black levels of color reproduction and high-resolution images.i think that is enough for now. I won’t test your patience any further and get ahead with the four picks of the best 4k Projectors under $3000.

Also Check Out: Is a Projector Better Than TV For The Eyes?

The winner for me is BenQ HT5550, the best 4k projector under 3000 dollars. Well, what’s ideal for me might not be for you based on your priorities, but I can state my opinion and recommendation, right? So allow me to brief you a bit regarding it.

So the 5550 is a pixel-shifting 4k projector with top-notch color precision enfolding 100 percent of dc ip3 and equips an unbelievable image with both SDR and HDR content. It supports 3d, includes frame interpolation, and contains a much more promising lens in contrast to the less costly BenQ projectors that deliver a sharper image with adequate installation features.

The very close runner-up for the best projector under $3000 is the Epson 5050UB. So, Epson projectors are not DLP; they are what’s known as 3 LCDs. And the main advantage of 3 LCDs is that they usually have brighter and more precise colors and don’t include the rainbow effect.

Also Check Out: Do Gaming Projectors Have Input Lag

The Epson 5050UB is a 4k capable home theater projector that sells for under 300 dollars (I am true to my word, you know). The lens has a built-in motorized lens cover that automatically opens and closes when you turn the projector on or off. You won’t encounter much except on the right side; you will have a small door that has a few buttons behind it. So you find basic ones like the menu, lens, source power, and navigation buttons. There is a lot to cover, so let’s do that in the specs section.

It is comparatively cheaper than getting a 100-inch 4k tv. Yes, you may agree that you will need to replace the lamp every 5000 hours, but even so, the projector is cheaper to run over five years or more.

I am just trying my best to be considerate of buyers with different needs.The price range is not the only reason, though, that I included the Epson EH-TW7000 in this list. I did so because I’m aware that you want to know about the best 4k projector, and being under 3000 dollars indicates that you have no compromise on the quality factor.

So let me add to that as well. This 4k projector is also a breeze to set up, and you can be up and running in a couple of steps thanks to its zoom lens and lens shift features.It is easy to adapt to your living space (being compact). It is not intrusive, and that is a good thing. That also means it can be moved from room to room if needed.There is a theater-like cinematic experience to its color reproduction, and the contrast is quite impressive.

Paired with a good soundbar, speaker setup, or headphones, you will be in for quite a treat.The multitude of connectivity ports provides flexibility to connect your devices, whether a game console pc or media streaming device.

It is a very much at-home movie-watching projector.Filmmaker mode gives you the picture that the director wanted you to see. BenQ, as we know, has incredible color accuracy, and this projector is no different. From the media stick, you have direct access to android tv and also the google play store. You can also access prime video directly from the remote control, but there isn’t the ability to do that with Netflix.

It uses the same pixel shifting technology to create that 4k ultra HD image, and if you’re after that huge screen movie experience, then just from two and a half meters or just over eight feet, you can get a 100-inch screen, and if you’ve got a three-meter distance, you’ll get 120 inches. There is the ability to align the screen as well. You can rotate it if you want to, so you can have this off on an angle, and it will work with no problem.

Question-What to look out for in DLP projectors?

Ans-Some people catch flashes of colors (the rainbow effect) across the screen on a DLP projector.

Question-Which type of projector does not provide the rainbow effect?

Ans-The Epson EH -TW7000 is the most reasonable one.

Ans-Yes, it does. It is the first thing you need to consider. You may not have enough space, and the projector, as we all know, ought to be a specific length from the screen.

Ans-The space the projector needs to be away from the screen to deliver a size image is called throw.

Question-What to do if you have a small room?

Question-What is a short throw projector?

Question-What is an ultra-short throw projector?

Can You Use any Projector for Golf Simulator