Is a Projector Better Than TV For The Eyes? 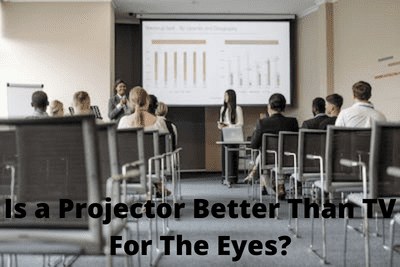 You require details regarding how a projector and TV work because the answer to your actual question lies within this explanation. Still, I will let you know if a projector is better than a TV for eyes or not and then get ahead with the reasoning.

Also Check Out:Does a Projector Use More Electricity Than a TV?

Yes, it is better

The way a projector functions is healthy for your eyes.

A projector focuses light on the wall, and with the reflection of light from the wall, it reaches the viewers’ eyes. That is the only reason most projectors need a dim or dark room to produce a clear or crispy picture. The same applies to movie theaters. Cinematic experience either at home or theater sure is healthy. (Good for you)

The surface that the light from the projector hits on before hitting your eyes absorbs the harmful wavelengths.

The TV, on the other hand, emits light instead of reflecting. That direct exposure will have an extra dose of detrimental wavelengths and blue light (I will get to it in a short while).

Projectors come equipped with features that assist avert unexpected eye injury. They have an Eye Protection feature that temporarily turns off the lens when caught (I am talking about you) too close to the projector beam. It is especially beneficial for kids and elders, and I appreciate the ones who came up with this feature.

Direct projector beam exposure won’t happen because a projector cares for your eye health, maybe more than you do. (I mean, I can’t differentiate between a cat and a dog without my glasses, but I realized it late. So excuse my honesty)

If not gaming, you can not go without watching anime, Korean series, or any series on Netflix. Most of us spend our time indoors doing such stuff (correct me if I am wrong, but I am talking about the majority). So, yep, blue light should be the foremost concern for us.

How is blue light harmful?

Natural blue light (we get from the sun), when merged with artificial and directed to our eyes through a TV, is detrimental to our eye health. If you are overexposed to sunlight, you get sunburns, but we have a solution in the shape of UV-blocking creams and stuff. In the case of TV exposure, neither creams nor sunglasses help.

What range of blue light is even more harmful?

High-energy blue-violet light that falls in the 415-455nm band harms the lens and retina of our eyes remarkably.

Why only a TV and not a projector?

Because as I said, it emits light, and the projector reflects light indirectly. Testing it yourself, you will be able to feel how your eye strain level differs from a TV to a projector. It causes a digital eye strain, and to prevent that from happening, opt for a projector if, like me, you can’t go without prolonged screen time.

I hope this article helped you decide what to choose between a projector and a TV, considering eye health is your first concern.

The Best Monitors for PS4 Slim