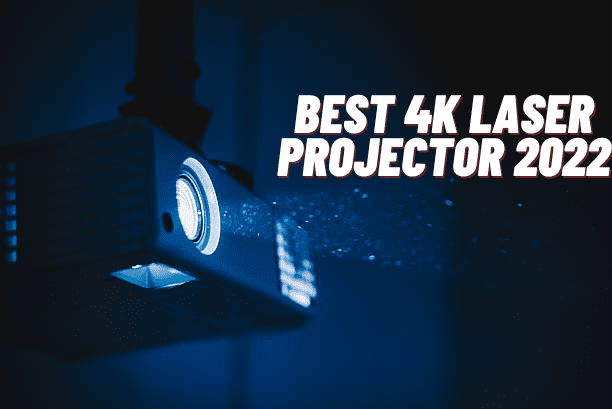 In this article, we are going to be talking about the top 3 best 4k laser smart tv projectors. The goal is to help save your time; there are easily more than a hundred different projectors and they all have these weird backs that no one understands. Some have high specs but very bad reviews.

The shared info will help find you the right projector for your needs; the protector world is pretty complex so this article simplifies all the terms and hopefully by the end of this article, you’re gonna be smiling. Before we begin, let’s just clarify some things that people have misconceptions about. So first of all, why buy a 4k laser projector over a lamp projector? What’s the benefit?

Convenient in every way possible

Second of all, you cut down on the replacement costs of the lamps. Now with lamp projectors every 5000 hours you’re gonna have to replace the lamp with the laser projector, you get around 20 000 to 25 000 hours based on the projector so that is a lot of saved money in the long run and it’s a lot of hassle and thinking.

The third point is that they are much more energy efficient now thanks to their higher energy efficiency they produce less heat and because they produce less heat they don’t need to have as big fans. So you won’t hear an annoying audible fan noise as you will with the lamp projector because they stay cooler. they don’t need to cool as much in the long run; you will cut down on energy bills and will also cut down on the lamp replacement build but please no laser projectors cost more than lamp projectors like much more but they are very worth it because they’re going to give you a cinematic experience.

They are the more future-proof option if you want a more cinematic and cool experience. Those who are on a very tight budget now. If you have a very tight budget I would recommend you go for a lamp projector because you might get more features for a lower price but you will have to pay more maintenance costs in the long run but it will give you a better overall projector.

If you don’t have too much money to spend on a project, okay what things should you look out for on a projector?

First of all, if you’re gonna be using this projector in a bright room; you’re gonna be looking at the ANSI lumen rating and you’re also gonna be looking at the contrast ratio. you want these two values to be pretty high. Usually, an ANSI lumen above 3000 is going to be good for a bright room experience and the contrast ratio of above 500 000 to 1 is going to be amazing in bright rooms. and you want to know how much projection hits a certain spot; you don’t want

It is an award-winning projector that has won multiple awards from many technology-reviewing experts. It beats most of the competition out there; you get 2 500-answer lumens of brightness combined with a miraculous 1.5 million to one image contrast ratio. Usually, you cannot find such a contrast ratio at such a price and it adopts a three-segment color wheel to display the most accurate colors for enhanced purity of colors and brightness.

You also get aldb3 technology and dlp display technology and the most important feature of all, you get HDR 10 plus. If you don’t know what that means, that’s the industry standard these days for the best quality viewing experience possible and it means that you’re going to have a very high contrast ratio for a more vivid experience. The screen size gets up to 150 inches at a distance of 16.7 inches which is perfect and thanks to the three-segment colorway you get a pretty wide color gamut which is a more future-like experience with a vast amount of color. As for audio, it has 60-watt Harman Kardon speakers; these speakers do sound epic and they are pretty good for a projector.

However, usually someone who spends this type of money on a projector should probably already have a surround sound system and if you do, don’t worry it will connect fine and if you don’t, the sound of this projector is awesome. Connectivity wise, the vava gives you lots of options; you get three hdmi ports, USB audio in and audio out ports; you get spdif port and it has all the ports to cover connecting your hard drive sound bars, and more. Now, the lifetime of the light source in this projector is 25 000 hours until you need to replace the light which is five times more than most lamp projectors. This projector also features Bluetooth and wifi so basically, you can stream your favorite shows from Netflix to amazon prime tv to apple tv whatever you want on the wi-fi connectivity and using Bluetooth.

Okay coming up next, we have the best cheap projector. So this is the LG hu80ka 4k ultra HD laser smart tv home theater sine beam projector. Anyways this projector is going to be the best bang for your buck and it is impossible to find a better-value laser projector than this.  If you’re in doubt and want to spend as little as possible look no further because this projector is the way to go. Okay, what makes this projector so amazing? The fact that it cost 1 900 and you’re going to get all the specs I’m going to tell you about. So you get 4k ultra HD native resolution, you get 2 500 lumens of brightness, and you get a 150 000 to 1 contrast ratio.

These two numbers and given the fact that it is the laser projector mean that it won’t do well in amazingly lit rooms but it will do well in medium-lit rooms. This is an hdr10 ready projector and you can go up to 150 inches in screen size. The noise level of this projector is only 30 decibels which is pretty quiet for a projector. You get 20 000 hours of light source life and it is a smart tv that is ready with wireless streaming of tv, Netflix, youtube, and many other sources so whatever you want to watch you can watch on this thing using wi-fi.

The best thing of all is this thing is extremely portable so if you’re up for portability you like a projector that you can take from one room to another you can take it with your friends, this is the way to go. It is built in with a handle and it has a very great shape for ease of transport and you can easily carry it anywhere and you can put it up anywhere. You can stand it up, you can light it down, you can hang it from a wall whatever you want.

If you do want the best projector out there for a bright or welded room then you are going to have to weep with number three. So coming up is the best high-end 4k ultra short throw laser projector.  It is going to be the LG hu85la ultra short throw 4k laser smart homes user sign beam projector. Okay, so what makes this one so special? Why does it cost around five thousand dollars?

Well, this projector has all the tricks up its sleeve so I’ll tell you why this thing costs so much. First of all, you can project a 120-inch screen from just 7.2 inches away from the wall. Also, it has LG web os light which means that by using the included magic remote on this LG sign beam projector, you get to access LG’s web os smart tv operating system. So you can get to watch all your favorite content streaming apps like Netflix amazon prime and voodoo hence the smart tv name tag. what else it has built-in Alexa and google assistant and it also features LG thin cute ai technology which allows you to control the compatible smart home devices with voice command just as you would use an Alexa or google assistant speaker.

So the projector itself becomes an Alexa google assistant and you also get Bluetooth connectivity so you can connect the phone to the projector and you can stream your favorite music using the projector speakers. As for connectivity you can use miracast for versatile connectivity to stream from your phone. It is hdr10 ready. This has room motion technology which is the type of video person that makes all videos look and feel more fluid. It is much better than dlp projectors or laser and dual laser projectors.

This features a three-channel laser which is instead of a color wheel that is used on most other cheaper laser projectors. The three laser feature is going to give you ultimate color accuracy and incredible white color coverage ensuring incredible color production up to the 12-bit color. You also get a warping feature to make sure the screen is just perfect and of course, you get some incredibly powerful built-in speakers that allow for a cinematic experience. The most important part is it has two thousand seven hundred and six pretty good lumens but where it screams awesome is the contrast ratio two million to one contrast ratio which is super.

Advantages and Disadvantages of Projector