Can You Bridge a 4-Channel Amp to 1 Subwoofer? 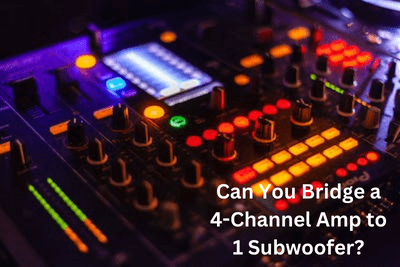 Spoiler alert (at the very start)… yes you can!
I didn’t want you to wait till the end to know the possibility. Instead, I will utilize that time in clarifying how you can do so.

Also Check Out: Best Amplifiers Under $500

It’s because a subwoofer utilises frequencies passed down by the low pass filter.

It will become easy, I promise.

Just some reassurance before going any further in case you needed it; the process may seem a bit critical at first but once you are done with this article and start with the implementation, it becomes super easy.

The number of channels doesn’t matter.

Also, the main process is the same for every channel; the number of channels does not make a difference. If you are familiar with how to bridge a two-channel amp, you can bridge a four-channel amp as well.

What else is the requirement?
Car audio wiring

You should have basic knowledge of car audio wiring and I am not saying to go read about it and then come back here. I’ll enlighten you on that along the way.

2: Connecting the positive terminal of channel one to the subwoofer
Wire stripper

3: Connecting the – ve terminal of channel two to the subwoofer

Again, utilize a wire stripper to strip about ½ inch of insulation. Run the speaker wire from channel two’s – ve terminal to the first subwoofer’s – ve terminal.
Ensure the connection is safe by tightening the terminal screw-down clamp.

4: Repeat the same steps for channels three and four