Difference Between NoteBook and Chrome Book? 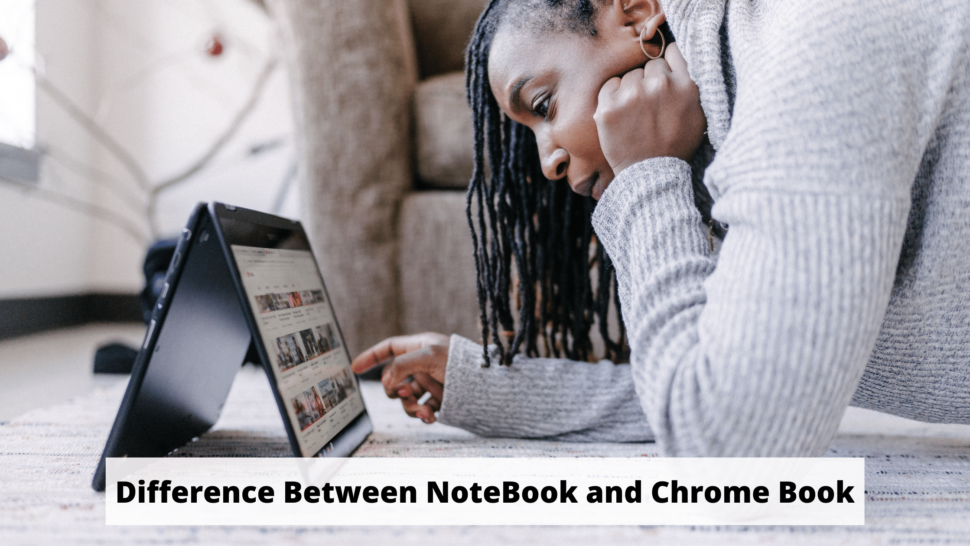 You’ve probably heard of notebook and Chrome book. You may even own one. But do you know the difference between these two types of computers? Let’s find out.

The notebook and Chrome book are two very different types of computers. The most apparent difference between them is that a Chromebook is a notebook that runs Google’s Chrome operating system.

You may also like Are Chromebooks Good For Working From Home

In contrast, a notebook is a traditional computer that runs an operating system like Microsoft Windows or macOS. You can think of a notebook as a laptop or a conventional desktop computer and a Chromebook as a tablet that can function as a notebook when you connect it to a keyboard.

We use two devices to run different software: digital notebooks and Chromebooks. They serve various functions, including taking notes, watching videos, and surfing the web. Compared to typical laptops, which are bulky and consume a lot of power, Chromebooks are small and light. They may utilize them for an extended period without needing to be recharged.

Chromebooks are a new sort of computer designed to assist you in getting things done more quickly and efficiently. Chrome OS powers their computers, a computer operating system with cloud storage, the best Google integrated with, and numerous layers of protection. You can continue using them by running offline-ready applications.

A Chromebook is a laptop or notebook computer pre-loaded with the Chrome OS. A Chromebook, according to CNET, is a laptop or a 2-in-1 computer that runs Google’s operating system, ChromeOS. By contrast, most other laptops run either Microsoft Windows or Apple macOS.

You may also like Which is the best, Laptop or NoteBook?

Chrome OS users frequently conduct all their activities through the browser or apps. While Chromebooks offer some offline capabilities, most of their functionality is available only when connected to the internet.

Chromebooks are generally simple to use and offer a good bargain; nevertheless, some applications may lack the functionality of their Windows or macOS counterparts. According to CNET, when compared to existing tools for Windows and macOS computers, video and photo editing programs on a Chromebook have limitations.

Laptops have evolved a lot over the years. Today, you have a massive range of options for buying a laptop computer. But one of the most popular options is the notebook. A notebook is a laptop that is thin and lightweight.

Laptops, also known as notebooks computers, are portable computers that can use away from an electrical outlet. They come in a wide range of sizes and styles, from extensive desktop replacements to lightweight machines that can fit in the palm of your hand.

Because laptops look and act like traditional notebooks in size and shape, they are called notebooks at their use. Since then, the gap between tablet computers and laptops has narrowed, with hybrid devices that offer the best of both worlds.

Notebook computers, sometimes called laptops, are portable computers that fit in your hands or on your knees. They’re used for everything from homework to video games and can be used anywhere—even in the backyard.

Laptop computers first came on the market in the 1990s, and today you can buy models that are less than an inch thick and weigh less than a pound. They’re easier to carry than desktop computers and are often more powerful, too.

HP acknowledges that the names laptop and notebook are frequently used interchangeably in the industry. On the other hand, notebooks describe their smallest and lightest gadgets. In other words, they argue that because notebook computers are so compact and portable, they are commonly confused with paper notebooks, so they should avoid this.

While all computers are considered notebooks, some are not. On the other hand, HP believes laptops to be more powerful, more significant, and, on average, more expensive versions of their portable computers. While the definition provided by this single brand is not universal, it is an excellent place to begin.