How To Improve Gaming Performance On Android by Developer Options? 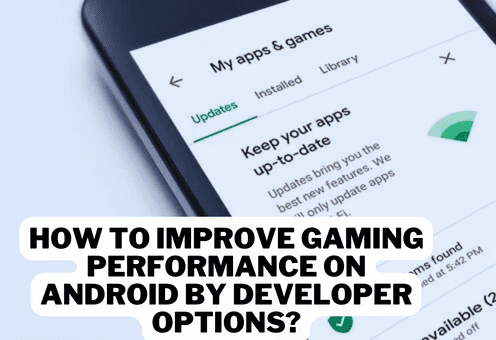 The first thing I have to do is tell you how to enable the developer options. Enabling developer options on android is the key when it comes to improving gaming performance. It varies between most phones, but usually within the system settings, you do the following;

Your developer options could differ from mine.

From there, go back to the previous screen, tap on the system, and then there it is; developer options. Now, depending on what android version you are running and what OEM you have, your developer options could be a bit different from mine. You could have a few more toggles or a few missing toggles; it all depends on what phone you are using. For those curious, I will be explaining the developer options with my google pixel 5 running android 12 betas 4.

The memory usage on your phone

Now the first option is called memory, and it is pretty self-explanatory. It tells you how much memory your phone has and the average amount of time that is being used. It is not in real-time but it does tell you the average memory used for the past 3 hours or you can change it to 6 hours 12 hours or 1 full day.

Also Check Out: Are Membrane Keyboards Good for Gaming?

The apps consuming your memory

Not only that, but you can even see what apps are consuming your memory. Usually, it is system apps, but diving in deeper, you can tap on any of them to see how frequently they are using your memory and their maximum usage on the rare occasion that there is a pesky memory-leaching app that you rarely ever use.

I recommend uninstalling it however if you like to see your memory running in real-time scroll down a bit further and you will see an option called running services. Here you will see what apps and services are currently running in the background. If you find a service that is taking up too much memory you can quickly terminate it.

Capturing bugs is mainly a developer thing but if you are ever experiencing any issues with an app or maybe even your system interface then you can use a bug report found within the developer options to capture these bugs so that you can send them to the developers so that they can fix the problem.

The bug report feature will keep a log of every action that you begin to do and it will even capture the issue you are experiencing. To share the bug report you just tap on the notification pretty easily and it helps developers find issues faster plus within the developer options if you scroll down even further you can have the bug report button appear in your power menu for easier access by default.

The bug reports don’t show your device-specific vendors such as Samsung, one plus google, etc but you can add this additional information in your bug reports by enabling verbose vendored logging within the developer options. It just helps out the developer by letting him or her know what phone manufacturer you have. You can also determine which app handles the bug report shortcut on your device, so since I am on a beta version of Android 12, I changed the bug report handler to the android beta feedback option reporting bugs directly to the google team that is working on android 12. They also created a feedback app that does a great job of making it easy for anyone to report an issue they are having with an app or the interface. And that is how you, as a developer, can improve gaming performance on android by developer options.

Should I Buy a Gaming Keyboard or a Gaming Mouse?