What are The Pros And Cons of a Pellet Smoker For BBQ? 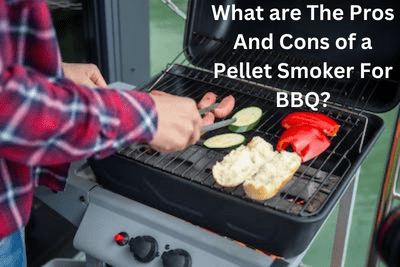 What are we going to talk about? Although it is pretty obvious considering the titled question and you being here but I am gonna pretend otherwise. So we are going to go over the basics of a pellet grill and exactly just what is a pellet grill (before getting to the main query just to keep some suspense).

Also Check Out: Are Pellet Smokers as Good as Wood Smokers?

So, what is a pellet grill?

Basically, it is your standard grill except it takes all the work out of it, you know. We got the hopper on one end; you put your pellets in it feeds it with the auger.

How does it work?

It’s got a fire in it just like a normal grill just a lot smaller. So instead of burning traditional charcoal or wood, a pellet grill works off condensed wood pellets. These pellets have been pressed and compacted to where they burn super efficiently.

Now every pellet grill, no matter what the model, is going to have some type of auger which moves the pellets from the hopper to the fire pot and that fire pot is where all the action is.

What role does electricity play in a pellet grill?

Now, you do have to have electricity for a pellet grill to work because that’s what moves the auger; it’s what controls that heat rod to get them going but after that. The electricity is just maintained; it’s just turning the auger in the fan.

So every pellet grill has a diverter of some type this is what channels the grease down to the grease drain but it also keeps the heat from being directly under your meat and throws it up on the sides; that’s what helps control those temperatures.

Now the actual temperatures are controlled on pellet grills by a thermocouple or thought of it as a thermostat. It usually comes in one of the firewalls and this is what reads the air temperature telling the control unit that the grill needs more pellets or to quit spitting them out. I thought it was a must to have a know how of a pellet smoker to grasp its pros and cons.

You are on the way home from work, you can say, ” hey fire the pellet grill up”, it’s ready to go when I get home. That must be anyone’s number one thing with pellet grills; it simplifies cooking good barbecue.

Well, is it a traditional barbecue flavor? That might bother you with a pellet smoker. Like, you love cooking on charcoal and maintaining the fire sometimes. But sometimes you want to take the easy route, I mean, does it taste like good barbecue? Heck yeah, it makes them delicious. But is it the same as burning the outlaw stick bar or using the drum; it’s not going to compete with those. That’s one of the things, you know, I mean they do have their cons with that but I mean I think it makes up for it with the easiness to use.

The pros outweigh the cons

It is not much maintenance on one; you keep it clean it’ll last forever and cook like you say cook’s great products.

I mean one of the other things that I don’t like about it is you gotta have electricity. If you just had a weber grill or something like that you can fire up. They do make inverters or these power packs that’ll run these grills because they don’t take a lot of power but you do have to have some electricity for them to work.

So that’s pretty much what a pellet grill is; man, it’s an efficient wood cooking machine. It’s technically a stick burner mountain they got little bitty sticks. They are small sticks but if you’re looking for a grill that you can get good barbecue flavor, easy to operate, takes up a small footprint and anybody can cook on it, I mean, I’ll always have one.