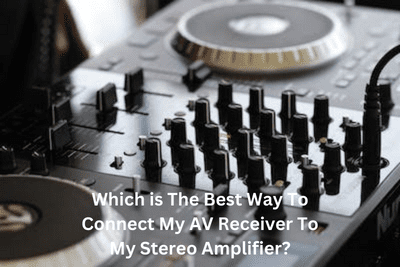 In today’s article, I will share how to add external amplification to your AV receiver. The way is quite simple, but the best way asks for some self-knowledge. There are some scenarios you should consider to make the right choices. Alright, everyone, so I will get right into it.

You will need some RCA cables, and that is pretty much it. Oh, and of course, a power amplifier, and I assume you already have an AV receiver with pre-outs.

So the scenarios I mentioned not too long ago talk about the reason for wanting external amplification.

Here is one; let’s say you have an AV receiver that can process 11 channels, so for a seven points two-point four Dolby atmos setup, however, it only powers nine channels meaning you have two channels, and you can’t power it with that specific AV receiver.

What do you do?

Now let’s take a second scenario on why you want external amplification. For instance, an AV receiver can power and process eleven channels, so I don’t have to worry about it. However, I’m pretty sure Denon does not push out 140 watts per channel, and manufacturers don’t tell you that they give you a two-channel rating, and I think the two Channel rating does not push out 140 watts RMS in the 8 ohms like it’s advertised.

We will get more power; if you have speakers that handle more wattage, I recommend looking into a three-channel amp to power your left, center, and right channel.

Okay, that’s what we call the front stage or front soundstage, and that’s what I think is more important than just powering too little add most speakers. So if you have a system that’s got these honking speakers, give yourself a big honking amplifier for the front three channels. It will change your home theater experience drastically.

Also, if you have an AV receiver that has 11 channels of processing and only nine channels of power, think about getting a three-channel amp for your front stage if you’ve got big-ass speakers. Alright, enough talking; let’s get upstairs.

So to connect the AV receiver to the stereo amplifier, I will first demonstrate with the Denon AVR X 6300 H, for instance. You will notice the left, right, and center RCA s. Hook up left and right, use the left and the right, plug those guys into the back of the Denon and plug those right into the proper ports on the back of the integrated halo. Now it is just a matter of plugging in your speaker wire, and guess what? That is it; pretty simple stuff. Don’t you think?

How Does An Amplifier Amplify a Signal ?