How Does An Amplifier Amplify a Signal ? 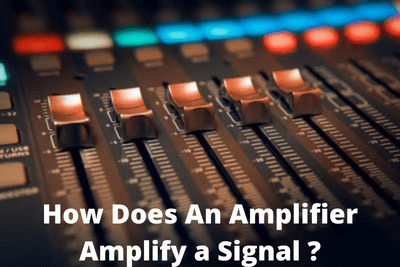 Your question about how an amplifier does its job implies that you know what an amplifier is. It is a device that requires an external power source to amplify a signal.

What else? Let’s get into the details and take a closer look at how an external power supply assists in amplifying a signal. Most amplifiers use a transistor to do the amplification.

A transistor is a small electronic device that has three pins on it. One of those pins is the input referred to as the collector. One of them is the output which we call an emitter, and the third one is called a base. The transistor works as a valve for electricity which can operate using that third pin, the base.

So by applying this small voltage to the base of the transistor, we open up the valve that allows the signals to flow with much more power. And this is the main principle of the transistor and how an amplifier amplifies a signal.

In other words, input voltage combines inside an amplifier with a musical signal to produce output power, measured in wattage. The power gets sent over a speaker wire to your speakers and makes them move in and out, which is how you hear music.

Class D, Class AB, Class A…what’s the difference between these amplifiers, and why would you want one over another for diverse applications?

Amplifiers use different designs to perform their primary job: to raise the voltage to combine with an audio signal to play over a set of speakers.

Also Check Out:What Does An Amplifier in Audio Equipment Exactly Do ?

There are various ways to achieve this, and depending on what you’re asking your amp to do, one design may be better for you than another.

Amplifier class designation refers to how that particular amp combines the power and signal.

The classes differ on how efficient they are, how much room they take up, handle the heat generated by amplification, and the fidelity of sound they produce.

Class A amps offer the highest audio fidelity but are inefficient and rare. Due to the heat they generate, you can’t use them in-car audio.

Class B amps run much more efficiently than Class A amps. But due to their two-transistor design, they produce crossover distortion. Pure Class B designs are exceedingly rare.

Class AB amplifiers take the best of Class A and Class B to produce an efficient amp with high-fidelity sound. Most home theater amps and stereo amps use a Class AB design.

Class D amps can take on a much smaller form since they are not producing as much waste heat. It makes them great for car audio and PA systems, though Class D amps don’t output as high-fidelity a sound as Class AB.

The trade-off for car audio is well worth it, though, because Class D amps don’t draw as much power. You don’t need to worry as much about keeping them cool.

That depends on what you plan to do with your amp.

How To Select a Perfect And Affordable Soundbar For LED TV?