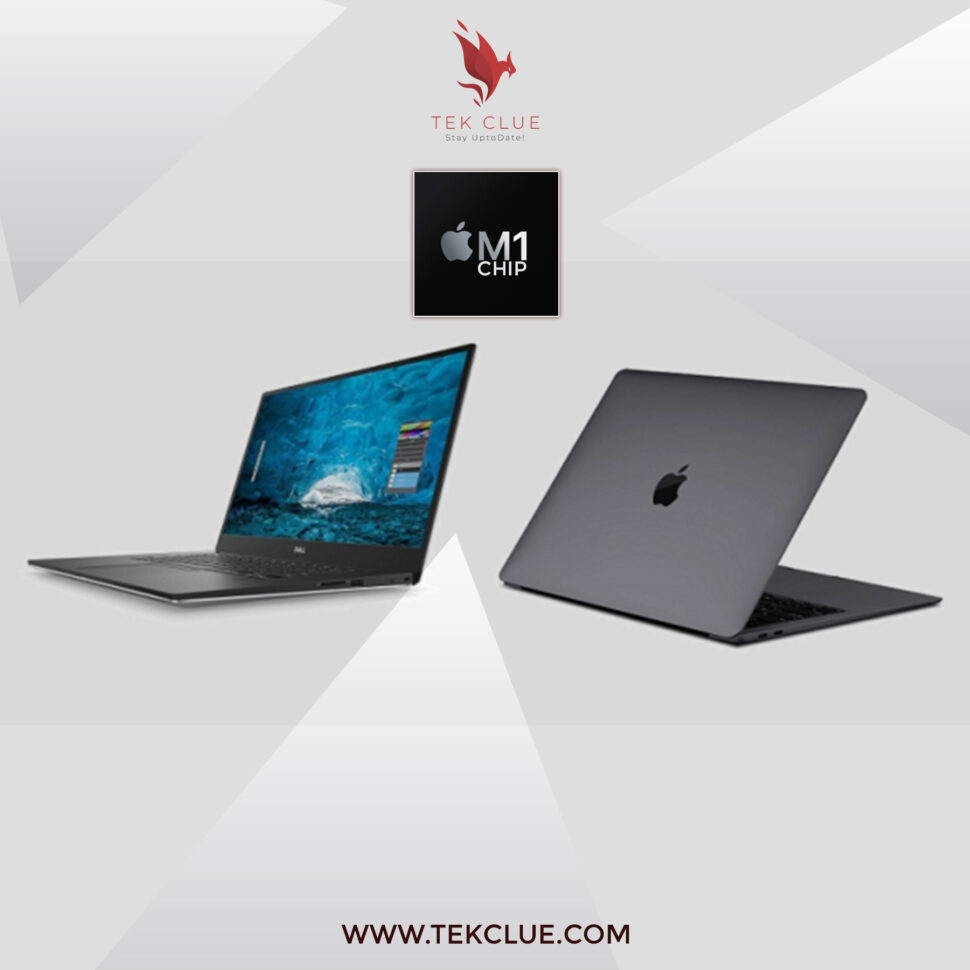 If you click on any link on https://tekclue.com & complete any purchase, we may earn a small commission.

Taking over the industries through technology upgrades all these years, Apple has always working on and getting better with each and every step. This year they decided to give out a new base, by presenting the brand new M1 Silicon Chip and Apple-designed Arm-based Chips rather than Intel Chips as in the prior MacBook Pro models.

The M1 is Apple’s first Mac-designed chip, which means it has one chip within the Mac with the processor, GPU, I/O, high-security protocols, and RAM. Apple claims this makes for improved battery life and higher output and power consumption, which we definitely got to notice. The M1 is based on a 5-nanometer method that makes it smaller and more compact than previous Apple chips. It has 16 billion transistors, which is the most that Apple has packed into a single chip. The M1 chip’s CPU is up to 2.8x faster than the Intel processor in the previous MacBook Pro, and GPU speeds are up to 5x faster. Unlike some MacBook Air models that have a 7-core GPU, all M1 MacBook Pro models come with an 8-core GPU.

Another internal switch, that the typical MacBook Air user would impact pro users and developers is that Apple has moved to a unified memory architecture UMA, meaning there is no separate memory for graphics. Apple argues that this is more successful. Unfortunately, we cannot talk about whether the 8GB model has enough RAM to accommodate both CPU and GPU requirements easily. With this very easy to handle and with longer battery life this chip could be perfect for your gaming laptop So, don’t wait and upgrade your older MacBook or switch from Windows to IOS.

Below is the Upgraded Models of Mac with the Newest M1 Chip.

By name it does extends the meaning of being an air thin product by Apple. The lightest laptop, modified solely by the Apple M1 chip, with Up to 3.5x higher CPU rates. The GPU accelerates up to 5x quicker thus smoother, for up to 9x faster computer vision and learning, the most advanced Neural Network. The longest battery life of a MacBook Air ever existed. And a fan-less, silent model. Never has this much strength, been so free to go. Fixed with a satisfying keyboard along with;

M1 brings more apps to mac than before. With a 720-p webcam, a limited port availability, no-touch screening but including the longer battery timing and elegant travel-friendly design it is available for $999. Donâ€™t be late in availing of the new tech offer of upgrading and switching and buy yours right now.

The most popular MacBook Pro among students is rumored to have its offsprings by next year, of course coming with new delighting features. But right now, the M1 powered 13 inched MacBook Pro:

M1 really is the star of todayâ€™s show, uplifting the old allegations and kind of con charges from its new devices. Same as MacBook Pro 13â€ a 16â€ version also available for the people preferring a slightly wider screen. The MacBook Pro boasts a dazzling 16-inch Retina monitor, the biggest Mac notebook Retina display ever. For dazzling highlights and vivid whites, it creates 500 nits of luminosity while producing deep blacks due to the exact picture alignment of liquid crystal molecules. And the broad color gamut of the P3 makes brilliant, true-to-life video and pictures. So, if you are unwanted of the new 13-inch availability of an M1 processed laptop, definitely a 16â€ version will be putting you through great ease. Little uplifted specs will be making your life much easier and sorted. So, donâ€™t miss your chance of having it and get yours.

Mac mini is the most powerful device from Apple, and now with M1, with such a small size, it packages a massive amount of efficiency and amazing new functionality. M1 offers an 8-core CPU with up to 3x higher performance than the previous version, speeding challenging workloads significantly, from compiling a million lines of code to creating massive multitrack music ventures. This is the fact that the Mac mini is designed to function as anything from a regular productivity churner, a home theatre machine, a little dynamo for music and video editing, or even just a multimedia monitor pusher, testifies to the enduring simplicity of this design. It doesn’t take up much room, and wherever you stash it looks fine.

The M1 Mac mini is the first to have Wi-Fi 6, although there is no choice for having it with a 10Gbps Ethernet port, only a standard gigabit, unlike the Intel edition. But Wi-Fi efficiency has been very strong. The compacted box allows us to use X-code to compile the code up to 3x quicker. It also gives us the 8-core GPU, an option of playing a graphics-intensive game with up to 4x higher frame rates. The little attachment renders a dynamic timeline up to 6x faster in Final Cut Pro, and using up to 3x as many real-time plug-ins in Logic Pro brings music development to new heights. The bag friendly Apple Mac Mini available for $699 awaits your purchase. Gamers, students, office workers, all are targeted directly by this new M1 silicon chip, making life easier and faster. This new invention has changed the game literally. Apple after being criticized for its weak battery and slow running for certain unoptimized apps is now working for a user-friendly environment and they are making it a standard for people of the future.