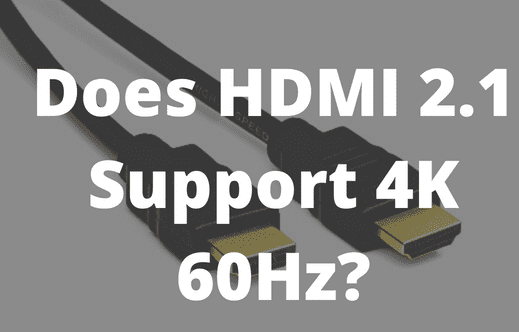 The most widely used licensing standard for TVs and monitors is HDMI. You’d be right to assume that it doesn’t support any contemporary features, given how frequently it appears on vintage TV receivers. Does hdmi 2.1 support 4k 60hz? So, does HDMI support 4K, or is it just an old standard from the days before Full HD became popular?

The current HDMI standard is 4K compatible. All 4K TVs support a 4K input via a suitable cable with an HDMI port. With the 2009 release of HDMI 1.4, a specification standard, 4K support, was first added. 4K at 60Hz and 120Hz are supported by modern HDMI 2.0 and 2.1 cables, respectively.

All HDMI cables and ports version 1.4 and up support 4K. Older HDMI standards constrain the refresh rate and precise resolution. 4096x2160p at 24Hz or 3840x2160p at 30Hz are supported by HDMI 1.4. Any 4K resolution can be supported at 120Hz by HDMI 2.1. There are different 4K resolutions, which you might not be aware of if you’re not a tech enthusiast.

Technically, 4K refers to anything with 4,000 or more horizontal pixels. Your TV is likely 3840x2160p, also known as 4K UHD in advertisements and everyday usage. However, 4096x2160p is referred to as 4K in the movie industry. Thus, 4K UHD at a refresh rate of up to 30Hz is supported by any TV or HDMI cable released after 2009 (the year HDMI 1.4 was introduced). Up to 8K 120Hz is supported by the most recent HDMI 2.1 and 2.1a standards, equivalent to four 4K TVs stuck together. You may relax knowing your HDMI port supports 4K if you just purchased a 4K TV. Even though there is possibly more than one, it can be the only video input port on your TV.

HDMI works well with 4K displays. Through an HDMI cable, all 4K TVs and 4K monitors support all the in-built capabilities, including HDR and high refresh rates. Additionally, more recent HDMI cables and ports offer Dolby Vision, eARC, low-latency mode, variable frame rates, and other valuable capabilities. You might be concerned that your new 65-inch (165.1-cm) 4K TV won’t work correctly since HDMI isn’t up to par. But as long as you’re using a compatible HDMI cable, you shouldn’t be concerned about it.

4K content will appear excellent if your TV, HDMI cable, and TV are compatible with the latest HDMI specifications. This is especially true if your receiver has an HDMI pass-through port. If you’re using an old cable, HDMI alone won’t work for 4K. Use the HDMI cable that came with your TV if it was provided. If not, review your TV’s specifications and purchase an HDMI cable. Because HDMI is backward compatible, I always advise choosing the most recent standard if you need help deciding which one to buy. This cable supports 8K at 60Hz, HDR, 12-bit color processing, and other features at up to 48 Gbps transfer speeds.

Recommended Article: What Does a Wireless HDMI Transmitter Do?

All HDMI versions 1.4, 2.0, and 2.1 support 4K. However, the more recent HDMI standards support higher refresh rates, HDR, greater color depths, and other significant features. Get an HDMI 2.0 cable or better for your 4K TV to ensure you have all the newest features. Because the HDMI port on your 4K TV is designed to support its native resolution, you don’t need to be concerned about it. However, it still leaves the cable and TV receiver issue up for discussion.

A 4K receiver and a compatible HDMI cable are required. Although technically capable of supporting 4K, HDMI 1.4 can only do so at 30Hz. Additionally, HDMI 1.4 does not support current HDR standards. Therefore you want to stay away from it whenever feasible. Since HDMI 2.0’s transfer rate is high enough to support a 4K signal at 60Hz, it is now the absolute minimum. With the addition of 4K 120Hz capabilities, HDMI 2.1 broadens the functionality even more.

4K 60Hz is only supported by HDMI 2.0 or newer cables. Even though HDMI 1.4 introduced 4K, it is only compatible with 30Hz. The HDMI 2.0 cable, TV, and receiver must all be consistent if you want to watch the video at 60 frames per second. Only HDMI 2.1-compliant hardware and cables support 4K at 120 Hz.

Before the 2013 debut of HDMI 2.0, 4K TVs weren’t widespread. Furthermore, there was a shortage of 4K content, most of which were 24 FPS motion pictures. Moreover, no video games could be played at 4K resolution on gaming consoles or graphics cards. It would help if you didn’t utilize an outdated HDMI cable discovered in your drawer. You would be better off purchasing a more recent line that complies with current standards, as it won’t support 4K 60Hz. Animations in video games are noticeably smoother and feel much more lifelike in videos and movies shot at 60 frames per second.

24bit color depth and 4K UHD up to 60Hz are supported by HDMI 2.0. To utilize your 4K TV’s full quality, use an HDMI 2.0 cable and a compatible TV receiver. HDR is also supported, albeit HDMI 2.1 offers better HDR support. Using HDMI 2.0, you won’t encounter issues when viewing 4K material. The HDMI 2.1 cable you have can be an HDMI 2.0 cable with a different designation. Devices can no longer be approved for 2.0, according to The Verge.

4K is supported by HDMI 1.4 and the standards that come after it. However, an HDMI 1.4 cable or port limits you to only 30Hz. Use an HDMI 2.0 cable with a suitable TV and receiver to ensure that your films and movies play at 4K 60Hz.

How to Connect Xbox one to Projector Without HDMI?

Does 4k Upscaling Only Work From HDMI?

Do You Need Special HDMI Cables For a 4k TV?