Should Amp Wattage Be Higher Than Speaker? 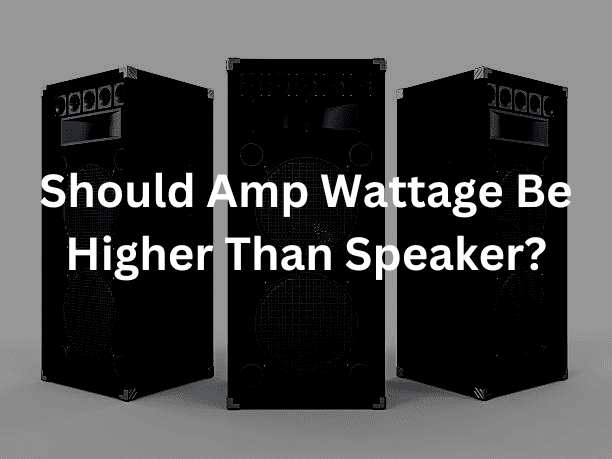 Hello people! Today’s article revolves around how much power you need in your speakers and helps you figure out the sufficient amp wattage. So a speaker has a value called a sensitivity rating. (I am pretty straightforward so let’s get into it).

A sensitivity rating is a relationship between three factors. Decibels are measured at one watt of power coming from your amplifier to the speaker at a distance measured at one meter, and all sensitivity ratings are comparable across all speakers so you can determine just how much power that you need to push through that speaker to achieve volume at your listening position.

The measure of sound pressure level

Relationship between decibel output and power

Now let’s look at the relationship between decibel output and power for a speaker sensitivity rating of 90 dB at 1 watt at 1 meter. If we double the power from one watts to two watts, we add 3 decibels of output to 93 decibels. Every time we double that power, we add another 3 decibels, so at 4 watts, 96, at 8 watts, 99 decibels of output. Now 99 decibels is a lot of sound pressure level, but keep in mind that is measured at a one-meter distance from the speaker. Your listing position is likely going to be three to four meters away from your speaker.

Well, how does distance relate to sound pressure levels?

As we double the distance on that sensitivity rating, we remove six decibels of energy from the system. So if it is at 99 decibels at 8 watts at 1 meter, at 2 meters at the same power it goes back to 93 dB, and at 4 meters it goes back down to 87, which is our target.

Also Check Out: How Much Power Does a Class D Amplifier Use?

From speaker to speaker that sensitivity rating is going to be different, which if we keep the distance, your listening distance the same will require either more or less power to achieve the same decibels at that listening position.

In a small car, you don’t need a ton of power, like a four-channel amp with around 50 watts per channel should provide a lot of sound in a smaller, mid-sized compact car. If your car is a little bit bigger and has a lot more air space to fill with sound, you are going to want a little bit more power. 75 watts and up should be enough power to get good, clear loud sound in a bigger car, even a large van or an SUV.

When you look at amplifier power ratings- when you are looking at two-channel amps and four-channel amps, you will see the power listed at four ohms, and that is because most of the speakers you put in your car in your doors and your dash, those are usually four-ohm speakers.

However, when you look at mono subwoofer amplifiers, the power will be rated at 2 ohms, and that is because that is kind of the sweet spot for subwoofers. When you hook up a sub to an amp, whether it is one or two, you kind of want to be at two ohms of impedance, because that is where those amplifiers are designed to be their best. Now, it’s time to address the titled question in more specific terms.

Is amp wattage supposed to be higher than the speaker?

When you are matching up your amplifier to your specific speakers, you should pick your speakers out first so that you can get the right amplifier to power the speakers you have chosen. And those speakers will have a power rating. Usually, it is in a range of power, and the number you want to focus on is the maximum RMS power recommended by the manufacturer, and you don’t want to go over that.

So let’s say you have chosen speakers that can handle 100 watts of RMS power. You can choose an amplifier with up to 100 watts of power. It does not have to be 100 watts. 75 watts, 50 watts, or any amount of power from an amplifier will make a big difference. The more power, the better. I hope this answers your query.