Should I Buy a GoPro Hero 9 or a Canon M50 for YouTube Vlogs? 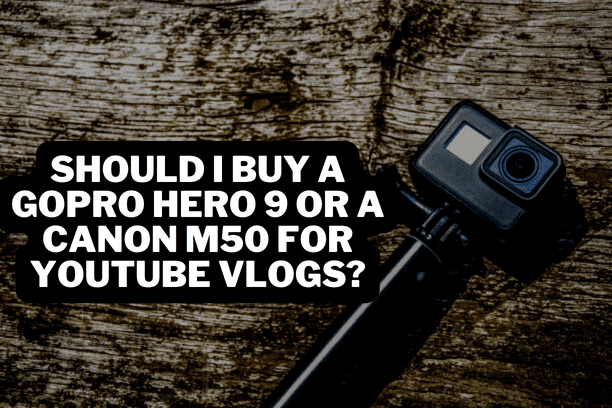 I will share whatever I know about both; GoPro Hero 9 and Canon M50 and leave it to you to decide which suits your needs better.

First, let’s talk about the pros and cons of the GoPro Hero 9 black. I didn’t realize how beneficial it is to have a screen in front if you are recording yourself especially or if you are setting it up and moving slightly further away. If you don’t want to use your smartphone, having this is a huge plus to just look at settings to look at your field of view whatever you need on that front screen.

The second pro on this would be the build quality and overall design; it is built so well. Everything is integrated into it and it works well, especially with those coming out mounts. I know the previous generation had this but I don’t know this to me was very cool; the fact that you can mount it and it slides back in so you don’t need that external case. All the water sealing is done well as well the weather sealing is proper. Build quality overall feels good; it is very sturdy and it feels like it is gonna last a very long time no matter how much damage you put it through.

Stabilization and the horizon tilt control

Lastly, one of the biggest pros I think of this is the stabilization and the horizon tilt control. This was a huge win for me especially when you are shooting with something like a GoPro where it gets to that fisheye level where your horizon can get messed up, the horizon control on this worked well. I wouldn’t necessarily think of a con on this. I think one of the things that annoyed me a little bit that was more of a user error than the GoPro error was that when I was holding it out, I could accidentally touch it with my finger; the touchscreen at the back so that was a bit off a bummer, not a big con, to be honest.

Also Check Out: How Can I Use a GoPro to Record my Vlog for a YouTube Channel?

Coming to the Canon M50, finally, Canon decided to put 4K into a mirrorless camera, this is a great step in the right direction. I am excited, we know that it shoots 4K at 23.98, we know that it does 60 frames per second at 1080p, which is full HD, and that it does 120 at 720p. That is cool to have and cool to play around with.

Now one of the first things you are gonna notice is this has a very swivel LCD, which makes it perfect for Vlogging, perfect for doing Instagram stories, selfies, or anything like that, which is what every Vlogger wants in this day and age. We need a flip-out screen that shows us what we’re filming; it helps tenfold.

The fact that now we have a nice compact little tiny mirrorless camera that has a flip-out screen. That right there, beast.

Flip-out screen in a 4K, that’s a vlogger’s dream right there. That is what everyone’s like cool, I’m sold.

So if you wanted something even wider, when you’re vlogging, you’d probably wanna pick up their 11 to 18 lens. You wanna go as wide as possible because that crop is still going to add focal length to that wide-angle lens. That is the whole package.

They got a little pop-up flash there if you wanna do some portraits. It’s not too bad, it’s not too heavy at all.

Also Check Out: What Equipment Do Most YouTubers Use?

The outside of the body

And then you got your hot shoe for mounting your vlog mic, so you take that little piece out. You are gonna go with the Rode Video micro if you are rocking this camera would be my guess just because it is gonna keep that nice slim smaller profile and that would essentially be your entire rig.

The focus does work when you are shooting in 4K, it is not gonna focus like it still does the job, but Canon’s dual pixel AF is just so good that why wouldn’t you wanna put that in there when you’re shooting 4K like that would just make it bulletproof. So that’s its downside to me, which is not being able to shoot dual pixels in 4K. Now I am sure it will be easier for you to decide which one of the two you need to buy for vlogging.

How Hard is it to Get 4000 Watch Hours On YouTube?

How Many Views Does it Take to Complete 4000 Watch Hours?