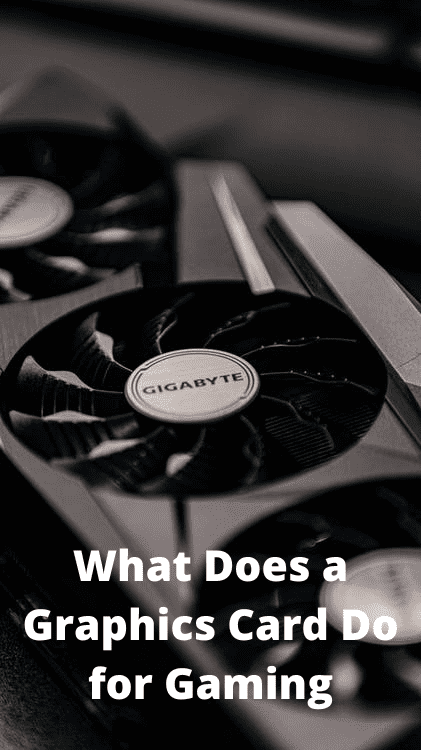 Many people use the term “GPU” when talking about gaming, but few understand its meaning. Most gamers know GPUs are critical but don’t know how they affect gameplay. What does a graphics card do for gaming?

This article explains what a GPU does for gaming and why it is so critical. As well as describing how GPUs affect FPS, I’ll cover what to look for when choosing one. Before you buy your next gaming computer, learn everything you need to know about a GPU!

Do You Need A GPU For Gaming?

For PC gaming, the GPU is perhaps the most significant component. To play most modern games, you need a GPU. With a powerful GPU, gaming will be much smoother with higher frame rates.

Creating a 3D image requires millions of calculations on your computer. Pixel shading is the process of shading pixels. GPUs, or graphics processing units, have become increasingly important as games have become more complex.

By performing these calculations quickly, the GPU frees up the CPU for more complex tasks such as controlling your computer’s inputs and outputs.

Is A 4GB Graphics Card Enough For Gaming?

If you play games at 1920*1080 or lower resolutions, a 4GB graphics card will suffice. Virtual reality or playing in 4K resolution requires at least 4GB of VRAM.

Since I’ve been using a 4GB graphics card for gaming, I haven’t had many problems. I usually play games that aren’t too graphically intensive, such as League of Legends or World of Warcraft. There was a slight difference in display quality when I tried using a 6GB graphics card, but nothing significant enough to be noticeable.

It is probably sufficient to have 4GB of VRAM for most titles. You may want to consider a GPU with more than just 4GB of dedicated VRAM If you are interested in VR or future-proofing your PC.

Question-Is there a difference between a laptop and a desktop computer?

Question-What are the functions of a laptop?

Ans-All of a desktop computer’s input and output capabilities and components are combined into a laptop, including a display screen, keyboard, speakers, data storage, disc drives, and pointing devices (touchpads or trackpads).

Question-What is the most suitable laptop for me?

Ans-Your budget, what you’ll use the computer for (gaming, family use, school, etc. ), whether you prefer a Mac or PC, how long its battery lasts, your desired setup, and how big your laptop display should be are all critical considerations.

For your computer to run images smoothly, it needs a graphics processing unit (GPU). What does a graphics card do for gaming? For some gamers, a 4GB graphics card is enough, but if you want a better gaming experience, you need more VRAM. A GPU with at least 8GB is also required for gaming activities such as playing in 4K or using virtual reality technology.

A new graphics card is what you need if you want one. I recommend an 8GB or 16GB model. You are considering AMD or Nvidia, and your budget will also help you make the right decision.