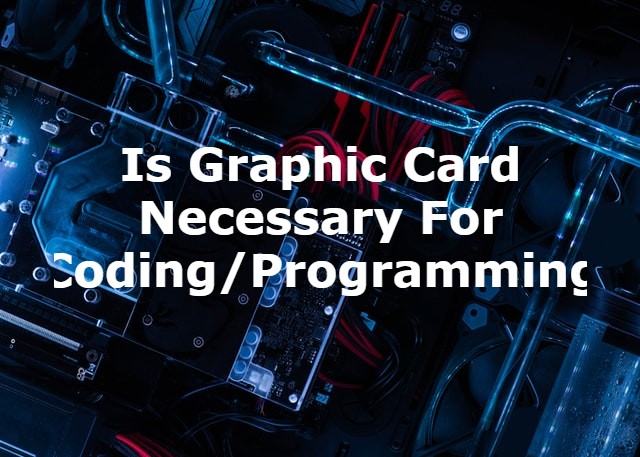 A graphic card is a device that renders graphics, usually for your computer. You might think that you need one to code or program, but the truth is it varies from person to person. For instance, if you are coding in languages like Python or Lua, which do not require 3D rendering, it probably won’t be necessary. However, if you are using something like Unity3D or Unreal Engine 4 with complex 3D models and animations, then yes, a graphic card will likely help with performance.

It is up for debate is graphic card necessary for coding or programming. Some people say that they are, while others claim that you don’t need one. Others still believe that it depends on what you’re using them for. We’ll explore the idea of what a graphics card is, how they work, and why some programmers may require them to do their job well.

You may also like How to Cool Down Laptop While Gaming

It is essential to consider the pros and cons of more complex graphics programming when determining what type of gaming computer you want. The best option for most people with limited budgets will be an integrated video card rather than a dedicated graphics processing unit (GPU).

A computer with the latest graphics card can make a world of difference in how smooth your programming feels. Is integrated graphics enough to get by on? Or should you invest in upgrading your PC for more power and better performance? In this article, let’s explore whether or not integrating an extra GPU is worth it.

What Is More Important For Programming: A CPU Or A GPU?

It’s a tricky question. But in simple terms, the answer depends on what you’re programming and how much processing power is needed for your task at hand – whether it’s graphics or an algorithm that requires heavy-duty calculations with data-crunching capabilities.

Before answering this tough query, let me do my best to explain CPU (Central Processing Unit) & GPU to get a better understanding of them.

What Is The CPU?

The Central Processing Unit, or CPU, is a complicated component of the computer that carries out and controls most functions. It’s always been seen as one of its key “brains” in many ways, especially when it comes to gaming systems.

What Is The GPU?

A graphics card, also called a video card or GPU, is a specialized electronic component that accelerates the creation and rendering of animations. They help CPUs perform mathematical calculations while performing other tasks like displaying images on the screen for us to see! There are two kinds: one with an integrated circuit board (ICB) connected directly onto your computer’s central processing unit(CPU); this type shares memory between both teams which means if you’re using 256MBs worth then only half will go into each location.

But not all cores need access at once, so it doesn’t matter too much; another option would have their own dedicated “graphics processing unit” device i quad-core processor because these have there own allocated resources meaning more power.

The Central Processing Unit (CPU) is the brain of your computer. It does all the math, and it’s how programs run and are executed by hardware. GPU chipsets help with graphics processing, but most decent level CPUs nowadays come equipped with integrated graphics which can handle anything a low-level program might need them for without any issue at lower speeds because they’re so power efficient.

If you are developing games or doing frontend work, a good GPU is essential. If your computer has to do any machine learning, always buy one for the best performance and results- even though in most cases, CPUs will be sufficient with their power too!

But still, there’s more situational than routine where programmers need GPUs, which might come into play when complex coding programs like video editing software. At the same time, back-end web development projects require more powerful hardware capable of handling large amounts of data at once without slowing down a due burden.

Difference Between Integrated And Dedicated GPUs

Integrated graphics are the type of video card that comes included with your computer. On the other hand, Dedicated cards were designed for graphic designers and professionals who work in highly demanding visual media like gaming or animation production to deliver excellent results without breaking a sweat.

Integrated graphics cards live in the CPU. They work with whatever system resources are available to them, including shared memory and processing power from other parts of your PC. Integrated GPUs use up to 5% of all installed RAM for their purpose – if you have a lot going on at once (like running video render jobs), it could slow down responsiveness across multiple tasks.

Integrated GPUs are great because they come free and may be the perfect choice for those who would rather not spend their money on a graphics card. The integrated video also consumes much less power than dedicated ones – which means you’ll have an extended battery life! However, these cards don’t provide strong enough performance when dealing with 3D rendering or intense gaming sessions; this can make them challenging to work within certain circumstances unless more powerful dedicated hardware comes into play.

A PC that can run a notepad is all you need to start programming. The integrated graphics unit in your computer will do the job for 80% of any programming-related task, and it’s much less expensive than purchasing high-end software or hardware.

Dedicated graphics cards are designed to handle heavy tasks such as rendering and reading in large files without impacting your system’s RAM. It is because they have their dedicated memory, which never gets allocated or used by the processor, so you can do whatever task that needs lots of data with ease while not worrying about how much storage space each operation uses up on either side.

Dedicated graphics cards are a great way to get the best performance out of your computer. Their processor, memory, and power supply provide higher levels than integrated ones in both games and desktop work alike! However, there’s one big drawback: if you don’t install them carefully, they can cause thermal issues, reduce their lifespan exponentially, and make parts overheat more rapidly (like your hard drive).

Is Graphic Card Necessary For Coding/Programming?

When it comes to programming, you don’t need a GPU at all. But if your code does bit graphics-related tasks, the performance will eventually suffer. You’ll have laggy animations or games that run choppy on lower-end computers with only one graphics card in them (like mine). My advice for these cases is always to make sure there are more than enough slots available to limit yourself when buying new parts down the road!

You can avoid any confusion by knowing what type(s)of processor an individual has installed before delving into coding. Most humans use CPUs that are less demanding than GPUs; finding spare time might become difficult without something else running simultaneously, such as streaming.

But as the question is about powerful GPU, I can say that you do not require a high-end graphics card to program. The minimum requirements needed are just something with an internet-enabled laptop or computer running Notepad. At least for programming purposes – anything less than this will be inefficient and may cause your code’s performance issues; such bugs would probably prevent it from compiling successfully without any debugging capabilities.

Should You Buy An Expensive Graphics Card For Programming?

Purchasing designs or not is absolutely upon you. On the off chance that your financial plan permits, you can feel free to buy your designs. Yet, if you are simply going to do programming with the PC, we don’t prescribe you purchase a designs card or a PC with an illustrations card. You can consider spending more cash on is the peripherals.

Do some exploration and pick different parts that are genuinely significant for programming. Track down a decent console that coordinates with your hands, get a nice CPU that accompanies excellent incorporated illustrations, get a proper ergonomic mouse that will diminish your wrist torment. Additionally, get another high-goal quality screen.

This way, getting a designs card for writing computer programs is discretionary. In this way, set aside some cash by going with a coordinated designs card. Put your money in other fundamental parts for a superior encounter. However, now and again, you will require a decent designs card that we have examined previously. Likewise, assuming you are anticipating a different screen arrangement, you may require a designs card on the off chance that you need more ports for a long time.

What Will Happen If I Don’t Have Any Graphics Card?( Is Graphic Card Necessary For Coding )

A designs card is liable for delivering pictures and illustrations to your screen. In this way, you cannot see anything on your screen without some designs card regardless of whether it is incorporated or committed

Is A Graphics Card Required For Multiple Monitor Setup? Is Graphic Card Necessary For Coding/Programming

Without a committed designs card, setting up various screens is intense. In this way, you would require a committed illustrations card with sufficient video ports for the number of screens you wish to utilize.

Is Integrated GPUs Powerful Enough To For Game And App Development?

For IOS or Android application improvement, it isn’t essential to have a designs card. You ought to put your cash in SSD and CPU for better execution. Furthermore, for the game turn of events, it isn’t constantly needed to have an illustrations card. Be that as it may, experts suggest having an illustrations card for simple performing multiple tasks and smooth execution.

Many people are under the impression that you need a graphics card for programming, but luckily we’ve discovered it isn’t necessary. If your budget allows it, you can get by with just an Intel Core i5 or AMD A10 processor and 8GB RAM (though 16 GB is better). Also, keep in mind to invest in SSD storage because software eats up all sorts of space! I hope this helps clear things up about needing one versus not necessarily, so don’t hesitate to ask us anything else related – thanks again to everyone who participated today.