What Happens if You Hold a Magnet To a Computer ? 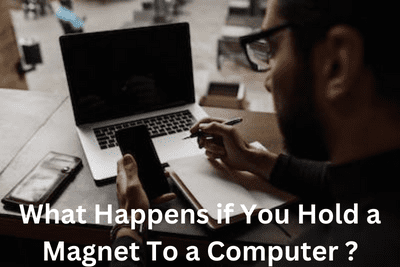 Well, that depends on the size and type of magnet you will be holding to a computer. The happenings differ as there is not just one kind of magnet, but various sorts exist. Plus, the situation in which you hold it to a computer also makes a difference. (I will talk about it in a while)

Also Check Out: Can A Magnet Damage A Motherboard?

Sometimes nothing happens, and other times all it brings is harm to your computer. Today in this digital world, Magnets can be a threat to our computing devices. See how I wrote they can be a threat indicating they can and can not be.

Could it be feasible for a small metal to wipe the memory off a laptop?

The hypothesis is that if you hold a Laptop near a magnet (a giant one), it will obliterate or shuffle everything on its hard drive.

How can it transpire?

To comprehend how this could happen, consider how a magnet can alter the movement of iron filings while a hard drive works similarly. The disk covered with a magnetically sensitive material can be re-orientated by the read head to create multiple imprints the machine analyzes as data. This data can be added to or deleted in the form of program text and images, so if it’s gullible to an interior magnetic source, it should be affected by an exterior one.

But how strong does the magnet have to be?

Remember the kids’ toy we used to play with (black colored and super fun)? It was too small ovoid magnets, noisy but not very strong.

The query is could they trouble a computer?

That won’t be doing anything. (I am being straightforward today, aren’t I?)

Now, what if a more powerful magnet gets tested?

A magnet over three times more potent than the toys can gather several hundred paper pins without effort. If it is provided a bit of growth by surrounding a coil of wire and passing a current through it, you form a more rugged electromagnet. In this subject, it is 30% more powerful than before, but your small computer would not even flutter this time either.

Time to utilize a massive magnet.

IT WILL BE DEAD when you do that. By shuffling every particle on the disk surface, the magnet will immediately wipe out every operational program and every file stowed on the computer. There will be zero data left for it to read, but it bears intense efforts to accomplish it. So it appears our magnetic data is secure in day-to-day life. Just be sure, and avoid any massive electromagnets. Also, regarding the situation point I mentioned at the very start, let me clarify it, too.

The great thing about magnets is that they only affect moving electrons. The force on an electron in a magnetic field is proportional to its speed. If it is stationary, the electron force is zero.

But why do magnets affect CRT monitors?

(Consider this a part of the FAQS section)

A CRT monitor produces pictures on the screen when electrons fly toward it via an electron gun. Therefore the presence of a magnet nearby can permanently magnetize the CRT monitor.

Can it be fixed?

It can be fixed by degaussing or demagnetizing the CRT monitor. But do not worry, as almost all LCD monitors today have fewer or no moving electrons. So even if magnets cause some effects, they will go away on restarting your monitor.

(I explained it above in detail but just mentioning it again for emphasis) No, not the little ones, but a car-lifting junkyard magnet kills your hard drive. The hard disk drive utilizes a powerful neodymium magnet to turn the read/write head, letting you read and note data. Our phones and laptops are safe to use in everyday life unless you put a giant magnet in their way.