Why Can’t I Turn On The Google Play Store On My Chromebook? 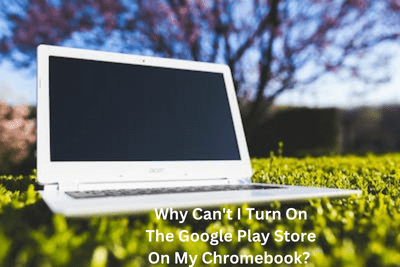 Hello, people. I can deduce two meanings from your question; either you have a play store on your Chromebook, but it is not working, or you don’t see the play store and are wondering why. I will answer both of your queries to be on the safe side. So, not all Chromebooks come with the feature of the google play store, and if you want to go into the details, I will do that as well.

Comparison between specifications of different models

Also Check Out: Chromebook VS Windows for Students

The third Chromebook is the Lenovo Thinkpad 11e which has four cores and four gigabytes of ram, so the Dell Chromebook 11 doesn’t support the google play store. You can’t install android apps on it and run games, but the question is why??

Let’s get to the why part.

As for the third Chromebook, the Lenovo ThinkPad e11 released in 2015, I mean probably like the Dell Chromebook, but the processor had four cores, which gives a much bigger performance, and it was also released using the newest technology at that time, that is 14 nanometers. So all the comparison is solely specification based.

The processor is the problem.

If the Chromebook has a low processor that has bad performance, this Chromebook wouldn’t have a google play store. Now coming to the solution part, considering you have the google play store feature but can’t open it. Thus you are here to get familiar with ways to fix it.

How to fix it if your Chromebook has the feature, but it does not work?

The first thing to fix it is to go to settings and then to the three lines on the top left. Then, go down to about Chrome OS and right to detail built information, and go to change the channel’. It is going to say stable, beta, and developer-unstable; you will have to press developer-unstable because that’s what loads the Google Play app store onto your Chromebook, and your device is most likely set on stable or beta, which is why you can’t turn on the google play store on your Chromebook.

When it’s done upgrading to developer-unstable, it will say restart Chromebook, and you will have to press it; it will not delete anything on your Chromebook. It will simply restart within a few seconds, and all you have to do is put in your password again, and hopefully, now the google play store will work just fine on your Chromebook.