Do You Have to Wrap Ribs on a Pellet Smoker? 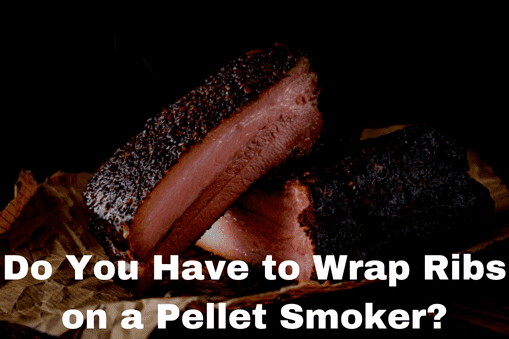 Smoking Ribs Without Foil: How To Eliminate The Crutch

Amateur pitmasters will often wrap their ribs in foil at some point during the cook. Even some professionals still resort to this technique. Although the practice is acceptable, it’s not necessary if you know what you’re doing. In this guide, we’ll walk you through the process of smoking ribs without foil.

If you choose to smoke ribs without wrapping them in foil, they’ll take a bit longer to cook. Plan on smoking them for at least an hour longer than you would if you’d wrapped them. The total cooking time may vary based on the weight of the racks. As a reward for your patience, the ribs will absorb more smoke flavor.

Recommended Article: You Flip Ribs When Smoking On a Pellet Grill?

Why Wrap Ribs In Foil?

The method is known in grilling circles as “the Texas crutch” for a reason. Wrapping meat in foil allows it to cook more quickly, giving you more control over the timing. That’s because the foil acts as a miniature oven-within-an-oven, trapping the heat inside. As you may have guessed, this causes the meat to steam inside the foil (see Can You Get “Fall Off The Bone” Ribs Without Foil, below. That means there’s a chance that the ribs could turn out soft and mushy if you’re not careful.

If you’re going to wrap the ribs, do it after they’ve already been on the grill for several hours. That way, they’ll get all the benefit of the smoke before you encase them in their wrapper. Additionally, you should remove the foil during the last 30-60 minutes of cooking to give the bark a chance to crisp up again. Butcher paper provides a nice halfway point between the foil wrapper and leaving the ribs naked. It’s more porous than foil, so some of the steam has a chance to escape. Any lost moisture will be absorbed by the paper instead of collecting and pooling on the foil. Ribs wrapped in butcher paper also have more flavor than foil-wrapped ribs.

Do Pellet Smokers Work as Well as Traditional Smokers?

How Long Will a 40 lb Bag of Pellets Last in a Smoker?

What are The Pros And Cons of a Pellet Smoker For BBQ?