How Do You Toggle Between Documents On a Mac? 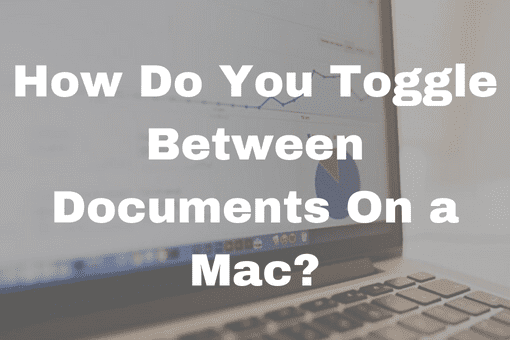 How do you toggle between documents on a mac? Sometimes, when working with document files on your Mac, you could open multiple files simultaneously to copy and paste passages or make changes to one document while reading another. A helpful keyboard shortcut works not only with Apple’s Pages program but also with other document-opening apps that makes navigating between various open documents a breeze.

Hold down the Command key while using the Tilde key on your keyboard to switch between two or more open documents in your preferred word processor. It’s important to know that if you have more than two documents open, you can continually press the (Tilde) key until you find the one you’re looking for. This will switch between the two papers if you only have two open. This also applies to other file types, like photos in the Preview app, even if you’ve already opened files of various kinds, such as PDFs and images.

Keyboard shortcuts have long been used to transition between windows of the same application. To navigate to the next window for the same app, press Command +'(backtick). I am pressing Command + Shift +’returns to the previous window.

Most people press Command +’until they find the correct window unless there are many windows. It’s done now. Carried out. Windows users have it far more complex… We’ll start with the settings in the various versions of Office for Windows before moving on to Windows’ pathetic substitutes.

Recommended Article: How to Connect Auking Projector to Macbook?

There are two options available in Office for Windows. The shortcut Ctrl + F6 or the Switch Windows button on the ribbon. Microsoft Word, Excel, and PowerPoint should cycle across all open windows when Ctrl + F6 is pressed. But only Word and PowerPoint function properly! According to Office Watcher Brian M., Excel 365 for Windows only changes between the first two open sheets while ignoring the third and subsequent open windows. We recently performed a self-test, and he is correct.

There isn’t a direct shortcut in Windows that cycles through the open windows of the current program exclusively. Tab and Alt together display all open programs. Press that shortcut repeatedly to cycle through the visible windows.

Since the list of windows is sorted by most recently launched, you may frequently find the window you want by pressing Alt + Tab or Alt + Shift + Tab, which moves the cursor in the other direction.

Is Macbook Air Good For Programming?