How Long Do Projectors Last? 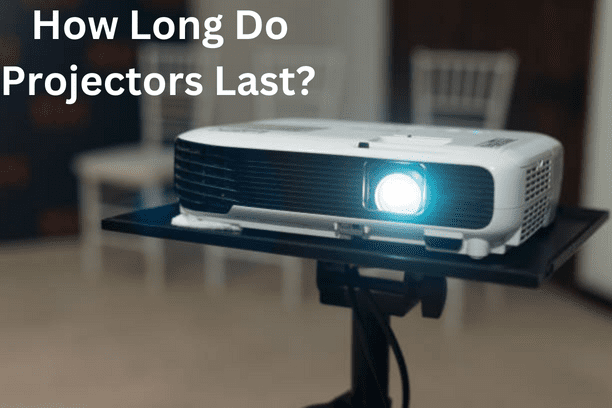 You should know that the average tv has a lifespan of up to 60 000 hours or more; that’s around 20 years if you were to use it for 10 hours a day. Well, unlike TVs, most projectors use a lamp that has a limited lifespan. This lifespan usually averages out to about 4 000 hours so if you were to use your projector for that same 10 hours a day you might get just over a year before you’d have to replace the lamp.

Now most projector lamps cost around 140 bucks or so and they’re not difficult to replace but after a few replacements, the image quality starts to deteriorate. So the alternative would be either laser or led projectors which have a much longer lifespan.

The light source and laser and led projectors usually last up to 25 000 hours; this works out to around six or seven years if you use it for that same 10 hours a day.

What’s the negative point to consider?

The only issue is that the laser or led light sources are often not serviceable so you’d either have to shift the projector to the manufacturer. Figure out how to get your hands on a replacement light source and do it yourself or throw the projector away.

Now to be fair, 10 hours a day is a lot of TVs watching so if you cut that down to 5 hours it can double the lifespan but either way, you have to consider that most TVs last much longer.

With all these new laser projectors popping up all over the place, it is a good time to share traditional land-based projectors versus laser and led projectors.

If you are looking for a projector that has a long-lasting light source but you don’t want to have to spend several thousand on a laser projector, then this is a fantastic option.

The next light source is lamp-based projectors. So chances are if you’ve seen a projector in someone’s house, it was probably lamp-based. Lamps are the most common light source found in long throw, in standard throw projectors, and they have a lifespan of around three to four thousand hours.

What about the cost?

Now as far as cost, these projectors are all over the place but most budget units do cost less than their laser counterparts. Now some people might think that lamp projectors are inferior to lasers but they do have a few benefits over lasers in some instances which is why they’re often used in high-end home theaters. So depending on the projector, lamp projectors sometimes have better black levels, better color accuracy and lower cost than lasers.

So if you’re the type of person who watches tv for several hours a day, you could be replacing the ball fairly often which tends to add up over time and if you go too long on the same bulb it can start to turn yellow and even possibly explode.

The first benefit is one I mentioned earlier which is lamp life so like led projectors, laser projectors usually have a lamp life range from 20 000 to 30 000 hours and aside from lamp life, other laser projector benefits include a brighter image considering it is using laser as a light source, ultra-short throw also known as laser tv capability and much faster startup time since a bulb doesn’t have to warm up.

Why is Projector Rental the Best Choice for Your Business?