How to Hide a Projector Screen? 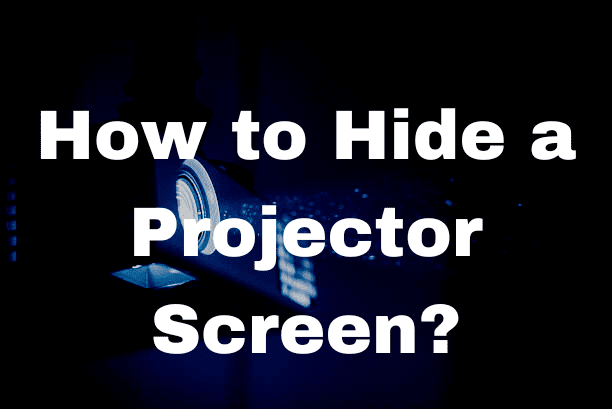 Why Is My Projector Screen Needed To Be Hidden?

You should conceal your projector screen for a few reasons. Maybe you don’t want your young children to harm it because you have small children. Alternatively, you may want to be able to use your projector in various locations without having to constantly set up and take down your fixed projector screen.

How To Hide Projector Screen In Various Ways?

1. Get A Motorized Projector Screen

You can lower and raise these screens using the included remote control. Although it is the simplest method, most people still need to start using these motorized projector displays.

Recommended Article: Can I Use My Phone as a Projector On a Wall?

2. Get A Fixed Frame Projector Screen

A screen with a fixed frame is fixed to the wall or the ceiling. You can quickly lower this ceiling mount screen to cover it when not used. Hidden projector screen! It’s as easy as it seems.

3. Get A Retractable Projector Screen

This kind of screen is comparable to a motorized screen. However, it lacks a remote. When you’re ready to use the projector, you’ll have to manually pull the screen down. You can roll it back up after viewing your preferred content on the projector screen.

4. Get A Portable Projector Screen

A portable projector screen is not permanently mounted like ceiling screens. When necessary, you can erect it, and you can take it down when you’re done. This is the ideal solution if you wish to use your projector in several rooms while camping.

This kind of screen is intended to be concealed when not in use. When ready to use it, mount it on the wall or the ceiling and then lower it. These projector screens are comparable to the retractable projector screens we previously mentioned.

6. Get Slides Or Panels

Question- How can a projector screen be hidden from view from the ceiling?

Answer- Installing a motorized screen that can be retracted into the ceiling is one option if you’re searching for a solution to conceal your projector screen when it’s not in use. The technique is often straightforward and enables you to keep the screen hidden when it’s not needed. You could even construct an artificial ceiling all the way around the screen.

Question- Can I watch the projector on the wall?

Answer- Yes, it is possible to view a projector on a wall. This may be how a projector is often set up for viewing. However, a few considerations exist while putting a projector in place for this use. The projector should first be set up so that the image it is projecting is the right size. Second, the wall must be clear of clutter and anything else obstructing the image.

Finally, the space should be sufficiently black to make the image visible but not too dark to make it impossible to watch movies or other media. A projector on a wall can make for an excellent viewing experience if all of these requirements are satisfied.

Question- A screen can be projected from behind.

Answer- The use of this approach has several benefits. First, it does away with any unique projector stand or mount requirement. The projector can be set up on a desk or behind the screen. Second, it enables you to create an exact square image that is distortion-free. Finally, it makes it simple to change the image’s focus and zoom without moving the projector.

We should have covered everything. Please share your questions in the comments section below if you have any more. All we have for you today is that. Soon, we’ll be back with a new subject. We Are Rank Projectors Until Then. Enjoy your day! Gratitude for reading!

How Does a Projector Improve Teamwork?

Why Does My Epson Projector Keeps Overheating?