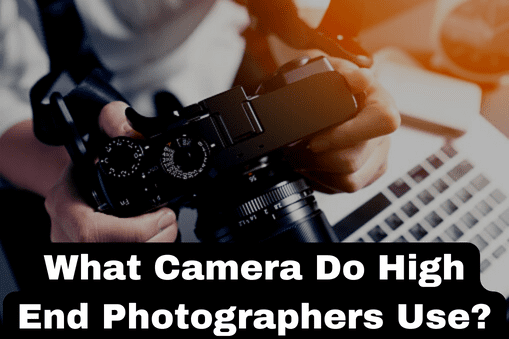 The answer to that question is they shoot flagship cameras and even though I am saying flagship it does not necessarily mean a brand new flagship. The best-kept secret in the photography world is the fact that older generation or two generation old flagship cameras are almost always going to be not only better performing or on par perform the same as these new entry-level cameras but they are pretty much always going to be either identical in price or cheaper in price.

I can give you a couple of easy go-to examples of this.

As great as it is at that price point I have seen sony a9 mark ones that sometimes go with a battery grip and extra batteries for the same price as that camera. I know a couple of people that are sports photographers that traded in their a74 to get an a9 and they are saying that the performance of the a9 is still better than the a7 iv.

Even after everything that sony said about an updated algorithm, better autofocus, more points in the sensor, etc; it still performs better. The a74 is in the video department and is a way better camera when it comes to buffer speed, reading, writing, etc in the photo department and the autofocus is exactly on par. So you tell me what sounds like a better bet?

Now let’s also look at Fujifilm. Fujifilm has this same thing. Let’s look at the xc4 and the xt3. Fujifilm will tell you the xc4 is going to perform better and autofocus just because it has a newer processor.

It is not just about the camera

It comes back to what I have always told people who ask me for suggestions. The camera does not make the photographer; the photographer makes the camera. And if you can see an iPhone 6s which is like four five six years old all right, come up with an amazing contest-winning image or a contest placing image, even a runner-up let’s say, that is amazing. Once again it is about the story that you tell with your camera; it is not about the camera. It is not about your lens; it is the story and you need to question; whether it is powerful or not powerful. That is really where it is at.

What are the Advantages and Disadvantages of a Mirrorless Camera?

How Do I Choose An External Flash For My Camera?