What Does an RF Modulator Do For a TV? 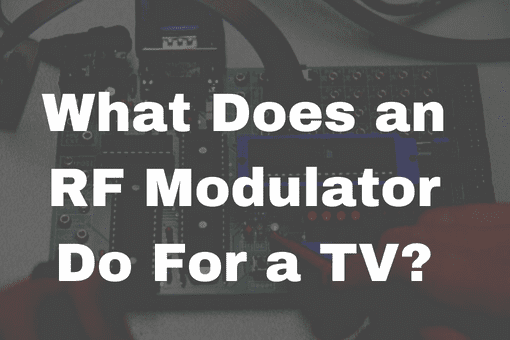 Older television sets, video game consoles from the 1980s and 1990s, and VCRs have a tonne of entertainment value. What does an RF Modulator do for a TV? Getting them to cooperate can be a fun exercise in nostalgia, frequently requiring unusual gadgets like RF modulators. These were widespread in the 1980s and early 1990s and allowed for the integration of newer technology with vintage televisions.

The Back of the Set

While older sets are much more straightforward, modern televisions can accept signals from a wide range of types of equipment. Most only have one or two types of direct inputs. The screw terminals on the earliest models are made to accept a 300-ohm signal from an external antenna. Although most consumers refer to it as a cable-TV connection, televisions from the 1970s and 1980s typically included a round, threaded 75-ohm connection known as an “F-connector.” Those fundamental connections quickly became obsolete as new electronics entered the market.

For better sound and image quality, newer devices, like VCRs and the first video game systems, started to separate the audio and video signals. You could connect them with a short patch cord if your TV set had the corresponding inputs. To help the device communicate with the TV, you needed an additional piece of equipment if all you had was a cable connection or antenna terminals. The RF modulator combined the audio and video signals into a format your TV could understand.

Used RF modulators are still freely available online and at yard sales and thrift shops, even though the device has largely vanished from the market. Your DVD player or game system typically has a set of audio/video inputs, and newer models may additionally have an S-video input. The output is a brief cable with an F-connector that attaches to the back of your TV using screws. Please turn on your TV and set it to that channel after swiping the switch on your RF modulator to channel 3 or 4. Your DVD player, camera, VCR, or video game console should all be sending out a signal.

You might require a few extra adaptors depending on the equipment you connect. For instance, a small “pigtail” adaptor that screws into the RF modulator’s F-connector and provides screw connectors at the other end is required if your TV only has screw terminals for an antenna. A Y-adaptor is required to combine left and right stereo signals into one connection because most RF modulators only have one audio input.

How to Connect a TV to an RF Modulator

What does an RF Modulator do for a TV? An RF modulator can change a coaxial cable jack on older televisions into a set of composite audio/video jacks for connecting more modern devices, like DVD players. A simple coaxial jack was the only required connection point when televisions were connected to coaxial cables for satellite or TV service and possibly a VCR decades ago. Older TV sets can still be used with contemporary AV components with an RF modulator.

Step 1: Attach a coaxial cable to the RF “IN” jack on the back of the TV by threading the coupler on the cable’s end clockwise.

Step 2: Connect the cable’s other end to the RF modulator’s coaxial jack marked “OUT.”

Step 4: Join the other ends of the composite cables to the component’s AV “Outs” connectors, such as a DVD player or VCR.

How to Connect Projector to Laptop Windows 11 With HDMI?

How Can I Reset My JVC TV Without a Remote?