Why is Projector An Output Device? 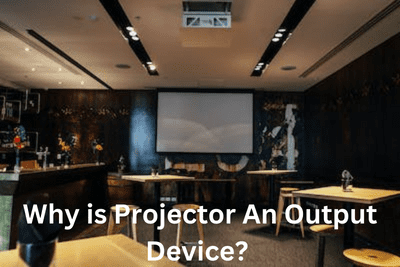 An input device is any hardware that allows us to send data to a computer. So if you type a message on a keyboard or touch a screen to make something happen, you are using an input device. The input devices are the buttons and the sensors for light, temperature, acceleration, and magnetism.

On the other hand, an output device is any hardware that allows a computer to communicate information. For instance, displaying a message on a screen, playing sound via a speaker or headphones, or printing a document. So if you want to play music on your phone and press play on the touchscreen, you are using an input device to tell your phone to play the music.

The phone will then play the music, and the sound will come through an output device: your headphones. The BBC micro: bit has several built-in input and output devices. In other words, the output devices receive processed information from the central processing unit and present it to the user.

Output devices generate computer outputs that are of the following two types; Soft copy output-it is temporary because it does not appear on paper or some material that a user can carry for showing to others or for filing and use when he is not using a computer.

For instance, contents displayed on a terminal screen, words spoken by the speaker. Hard copy output-it is permanent because it appears on paper or some material that a user can carry for showing to others or for filing and uses later when not using a computer.

For example, the output produced on paper by printers or plotters. Now see the classification of output devices; we can classify output devices broadly into monitors, printers, plotters, screen image projectors, and speakers (as I already mentioned before).

Is a Projector Better Than TV For The Eyes?