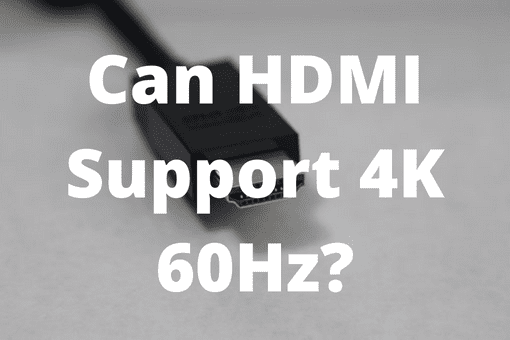 Yes, HDMI 2.0 can, but HDMI 1.4 can not support 4k 60hz. Your question indicates that you are unaware of the difference between the two hdmi standards. So I will do just that- enlighten you on that.

If you have ever needed to connect a gaming console to a tv, a pc to a monitor, or a laptop to a projector, you have probably used an hdmi connector. High definition multimedia interface or hdmi for short is an interface that is used to transmit audio and video data in an uncompressed or compressed form.

The HDMI standard was designed to be the digital replacement for previous analog standards. Before we had the hdmi interface, audio, and video transmission were done via analog standards like DVI and VGA.

The introduction of the hdmi standard did two things; the first was increasing performance by offering more bandwidth high resolutions and increased color quality, but the second thing that hdmi did was consolidate the market for video transmission interfaces. But not all hdmi connectors are created equal- we have quite a few different versions of hdmi connectors floating around nowadays.

So today we will be looking at two of the more popular versions; the hdmi 1.4 standard and the hdmi 2.0 standard. This article will compare the performance and features of the two.

Recommendede Article: Can You Use An 8K HDMI Cord On a 4K TV?

HDMI arc was also game-changing for the hdmi 1.4 standard. ARC stands for audio return channel, and it was a protocol that offered two communication channels between devices over a single channel. Before hdmi arc, you would have needed to have different cables for audio input and output.

It brings us to hdmi 2.0, which came out in 2013, and one of the main upgrades it brought over hdmi 1.4 was the massive increase in bandwidth. HDMI 1.4 could only do 10.2 gigabits per second, but hdmi 2.0 almost doubled that with 18 gigabits per second.

4k at 60hz (referring to your question)

HDMI 2.0 also got an upgrade in the audio quality department. HDMI 1.4 supported a maximum of 8 channels at 768 kilohertz. HDMI 2.0, on the other hand, supported a maximum of 32 channels of 1536 kilohertz. This was a huge upgrade in the audio stream quality but what made this update a huge hit amongst consumers was that 32 channel capability. It brought Dolby atmos standard to entertainment systems at home and allowed users to set up 5.1, and 7.2 speaker systems in their homes and truly enjoy 3d audio experiences in the comfort of their sofa.

However, it wasn’t until 2015 that hdmi got high dynamic range support. The hdmi 2.0 as protocol added HDR support to the hdmi ecosystem. HDR had become a staple now for home entertainment systems and nowadays almost every blockbuster movie or aaa game on either pc or console comes with hdr support. The addition of HDR support was well received by consumers.

HDMI 2.0 b shortly after added additional support for hybrid log gamma hdr while hdr systems like hdr10 and adobe vision are designed for streaming movies or playing video games hlg hdr was made to support broadcast cable and live tv. In retrospect, it hasn’t been such a huge update since almost no live channel transmits this kind of content to take advantage of it but we will see it in the future.

This is why it is important to know about the subtle differences and feature differences when buying a device with hdmi. Each version upgrade brought new features and increased performance which could be very important to you.

Are 4K And 8K HDMI Cables The Same