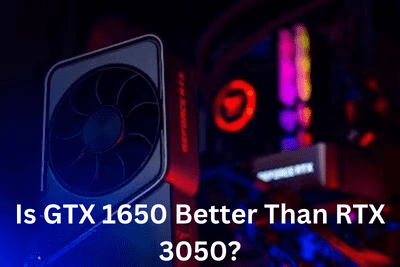 No, it is not. Honestly, you won’t find any reason to buy GTX 1650 with the option of The differences in specs between the two laptop GPUs will be discussed to clarify how RTX 3050 is a comparatively better option.

Some 3050 laptops out there will be able to run the GPU at double the wattage of what this one is capable of, and that will result in higher FPS. Though more power does also mean higher temperatures, it’s a tradeoff.

Say you were comparing a maxed-out 1650 running at 50 watts with a maxed-out 3050 running at 80 watts, then the performance gap would be even bigger. There’s more to life than clock speeds. Don’t forget the 3050 has more CUDA cores. More Cuda cores require more power to run, so it’s not too surprising to see that the 3050 laptops were drawing 19% more power at the wall.

Now DLSS only works with Nvidia’s RTX series GPUs, which means the 3050. The GTX 1650 cannot use DLSS though. AMD’s FSR doesn’t care though, it works just fine on the GTX 1650 and just fine on the RTX 3050. But as the 3050 can also use DLSS, it gets the best of both worlds; it seems like DLSS has a bit of an edge over FSR. But it does depend on the game and it can be quite close.

Difference due to DLSS

What if FPS is the same on both?

With FSR enabled on both, the 3050 gets 31% faster than the 1650, but the 3050 performs about the same with either DLSS or FSR turned on. Just because the FPS is about the same doesn’t mean both looks the same in terms of visual quality though.

That isn’t always the case though. Take Cyberpunk 2077 for example, both the 1650 and 3050 perform the same in this test with FSR enabled at a little over 50 FPS with medium settings. DLSS enabled on the 3050 will be able to give it a little further boost compared to using FSR though, putting the 3050 with DLSS on 8% ahead of 1650 with FSR on.

Dying Light 2 is another game that supports both FSR and DLSS. With both laptops running with FSR enabled, the 3050 gets 44% ahead of the 1650, but with DLSS turned on for the 3050 it has a smaller lead at 29%. FSR performs better on the 3050, though of course, that doesn’t mean that it necessarily looks better compared to DLSS. You could argue that as we’re mixing FSR and DLSS results then we should also be comparing the quality difference between them,  and that’s fair but not the goal of this article.

Unless you can get a refurbished, second-hand, or an otherwise great deal on a 1650 gaming laptop, a new 3050 laptop just seems to be cheaper while also performing much better in games, as we have just seen.