How Do You Adjust the Horizontal Keystone on a BenQ Projector? 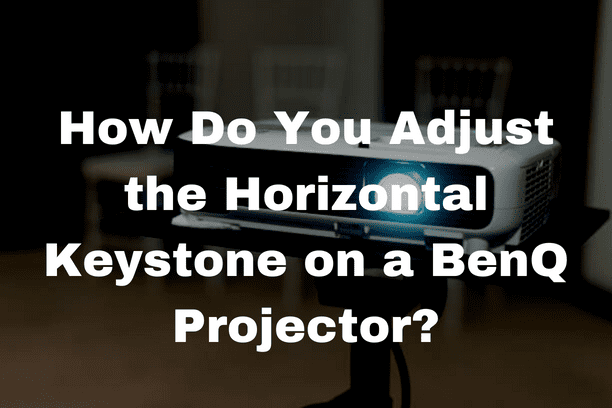 A vertical Keystone correction kind of fixes the top and the bottom of the image.

Horizontal Keystone correction does the opposite it; kind of tilts more side-to-side, so when your picture is not completely flush and, like say, your setup is not straight ahead at the wall. What that leads to is it is gonna kind of mess up the picture a little bit, and you are gonna have you know miss shape and image. It is not gonna be a perfect rectangle up on the wall so you are gonna use a vertical and horizontal keystone correction to help fix that.

Adjustment of the keystone

Normally, the projection is perpendicular to the screen, and the picture is like a trapezoid due to the high angle. The default value of the keystone is 0 and 0 for vertical and horizontal. If we put the project from the sideline, the screen shape will deform more. You will notice the deformation when the keystone value is 0 and 0. Now, use the keypad arrow keys to adjust it.

Direction keys on the remote

You can also adjust the keystone with direction keys on the remote. The screen becomes a normal formation by adjusting the 2D keystone. After correcting it, the shape of the picture becomes normal even if the projector is not perpendicular to the screen.

Manual Keystone better be avoided though

When your projector is not completely level what you are supposed to do is you are supposed to use your keystone correction on the projector when you have to refocus. Then usually, some part of your picture is going to be out of focus. So that is why I do not like using keystone correction because it typically messes up your picture more than it helps it. So that is why I would say if you could get this thing level and not have to worry about, you know, messing with it too much- that is typically the best bet.

That is it for everything you need to know concerning the adjustment of keystone on a Benq projector. I also made sure to include the difference between a vertical and horizontal keystone correction as people seem to be confused between the two.