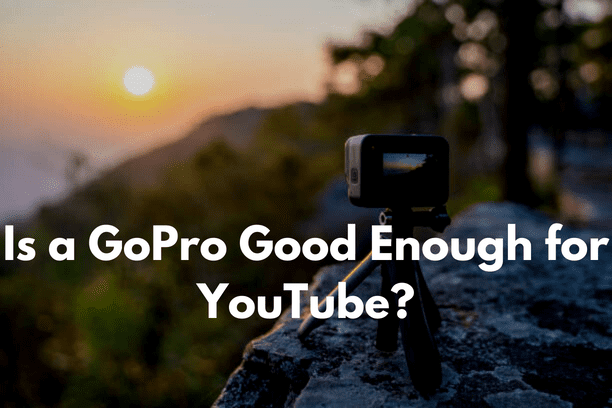 Now the GoPro isn’t specified in the titled question so I’ll be discussing the one which is considered the best GoPro. That will be an ideal option for comparison purposes and to answer your question if it’s good enough for YouTube. The GoPro Hero 10 is the best GoPro today, but it is also the most expensive GoPro today coming in at $500.

So is this worth the money?

And should you get the GoPro Hero 10? Now, if you’re looking to upgrade to the GoPro 10, or you’re new to GoPro, it’s really important to understand who this camera is for.

I think it comes down to three groups of people. And that first group, I will call the adventurers. These are the people who are going on hikes. Maybe they are surfers or they are bikers, and they wanna bring a camera that is shockproof and waterproof. They also like the GoPro because it’s small, portable, and has great stabilization.

Now, the second group of people would be your casual travelers. I think this camera is the ultimate travel camera. When it comes to going on vacation, you don’t wanna bring out your phone or a nice camera, if it can get all sandy or dirty and ruined. So having something like a GoPro with you, you can get some cool shots. And if you are that casual traveler, maybe you don’t even know how to operate a camera, well, the GoPro has fully automatic settings that you can just point and shoot, and get cool stuff without having to know how to operate a camera.

Also Check Out: Do I Need a Powerful Laptop for Photo Editing?

Lastly, if you’re someone who does video production, a GoPro can come in handy for you. If you’re someone who does get paid to shoot videos, picking up a GoPro, you can get some cool angles with this thing. You can mount this to all sorts of stuff because of how lightweight and small it is. You can set it up as an extra wide angle at an event, or you could even get some time-lapses with it.

You also have the GoPro app and it’s really easy to connect. Then you have a live feed view from your GoPro to your phone. On the 10, you’re also getting faster uploads to the app. And especially when you plug the USB-C straight from the GoPro to your phone, it’s gonna upload much faster. If you have an iPhone, go for it. It does recommend getting the Apple USB-C to lightning port adapter.

Also Check Out: Is it Better to Edit Photos on a Laptop or Tablet?

Live stream and use as a webcam

Now you can live stream and use this camera as a webcam. However, I don’t think it looks much better than just your average webcam, so I’m not gonna be using it this way. I also really like that they continue to update the GoPros. Even with the Hero Nine, there was a nice update that came out for that. And they’re continuing to update the 10.

All right, now let’s talk about the things that I do not like about the GoPro 10 and some things I wish they would fix. First off, when it comes to the GoPro colors, you are going to have a Flat profile, which is very de-saturated and there’s no contrast. This way, you can grade it later in the post. You’re also going to get Natural. So instead of having GoPro as you have on the Hero Nine, this way you have Natural, but you also have Vibrant. Now I’ve never really liked GoPro’s colors.

As I said, this is the best GoPro available, and the most expensive. So if you have the money to buy this thing, then go ahead and buy this if you’re looking for the best action camera. But personally, for me, I would not be buying the GoPro Hero 10, unless it was on sale and I could find it for a deal. And if that wasn’t the case, then I would end up buying the GoPro Hero Nine. Now I did a lot of tests between the Nine and the 10. And if you click on the screen, you can see how I concluded why I would buy the Nine versus the 10. I hope you guys enjoyed reading this article and that it cleared up what GoPro has to offer.

What Should I Look for in a Laptop for Photography?

How to Save Battery While Using Mobile Data?

Should I Unplug My Amp When Not in Use?