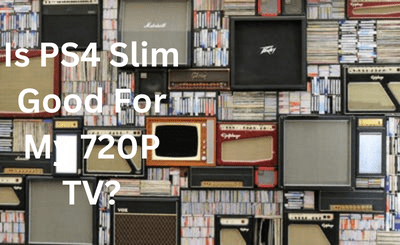 Is it good? Yes. Is it the best? Well, no 720p TV is not the ideal pick for PS4 Slim. Maybe this question of whether the ps4 slim is good enough for a 720p TV encompasses other expectations and priorities regarding your gaming experience. I will try to address them in this article is what I am trying to imply. What I got from your query is that you own a 720p TV (I am pretty good, right?)

Also Check Out: Can PS4 Slim Run On a 4K Monitor?

If you were thinking of buying a TV for your PS4 slim, not picking a 1080p one would not make any sense. You will get a decent 1080p TV for the same price, and it’s worth it.

So why is 720p not the best choice you can make for your Ps4 slim?

Ps4 slim is designed to work specifically on a 1080p TV and does support 720p, but the specifications make a difference in determining what it is best suited for in terms of resolution.

Would it cost more?

You can get a 1080p TV for the same price as a 720p one. And if you are confused between the Ps4 slim and the Ps4 Pro, that is not even a question yet will answer it just in case. There is, honestly, no point in buying a Ps4 pro for your 720p TV; 4k is the way to go. See, when you ask me for good, my goal is to stress the best. I doubt you will be satisfied if you go for the ps4 slim or Ps4 Pro for your 720p TV.

Also Check Out: The Best Monitors for PS4 Slim

What I am guessing is that you may be confused between the ps4 slim and Ps4 Pro, and to make the right choice for your 720p TV (if you own it already and can’t afford to get a new one), it is a must to highlight a few differences between the two.

DIFFERENCE BETWEEN THE TWO CONSOLES

The main difference between the two consoles is the specs.

The ps4 slim, powered by an 8-core AMD Jaguar CPU clocked at 1.6 gigahertz, a 1.84 teraflop AMD GPU, and eight gigs of GDDR5 RAM, comes with a 500-gigabyte hard drive. The Ps4 Pro uses the same eight-core Jaguar CPU, but this time it’s overclocks to 2.1 gigahertz, a more powerful 4.2 teraflop AMD GPU, eight gigs of gddr5 RAM plus one gigabyte of ddr3 memory, and also it has one terabyte hard drive.

How is the ps4 pro better in terms of that?

It gives Ps4 Pro a 30% boost and CPU performance at 100 percent greater GPU performance. (over the ps4 slim) The extra one gig of ram used for background apps allows games to have additional memory.

As expected, power consumption is quite different between the two systems. The ps4 slim uses up to 165 watts of power, while the Ps4 Pro uses almost double that at 310 watts. The Ps4 Slim features 2 USB 3.1 gen2 on ports and is HDR capable; the Ps4 Pro adds an extra USB and an optical audio port and can support 4k in addition to HDR.

So moving on to the games, the Ps4 Pro shows a noticeable difference compared to the ps4 slim-designed for 4k, it also makes games look better on a 1080p display. In this case, any game that receives a pro patch will downsample to 1080p. Some games will even get you extra visual advantages, such as improved textures and better frame rates. Any game not updated will play the same as it does on a ps4 slim, except for being upscaled to 4k.

But HDR mode changes that for the better; the game shows more overall color and detail in the shadows and highlights on the ps4 pro version as opposed to the brown look on the ps4 slim.

Now the game can run at 1080p on the Ps4 Pro, giving it a sharper image. The ps4 slim and Ps4 Pro also allows you to capture your gameplay; the ps4 slim screenshots limit to a resolution of 1080p, and videos record in 720p at 30fps. On the Ps4 Pro, screenshots are now in 4k, and recordings are in 1080p; you can also stream gameplay to youtube and 1080p 60 FPS.

Streaming quality over remote play or share play is now 1080p, an increase from 720p on the ps4 slim. On top of all that, the Ps4 Pro will render the operating system in 4k. So even apps like the web browser will remain crisp. In conclusion, the ps4 pro is the console to get if you only have a 4k TV or want the best graphics possible from a console system.

If you already own a 720p and can’t upgrade, the ps4 slim will work fine but not exceptional because the design is not for a lower resolution than 1080p.For 720p, however, ps4 slim is okay, and if you can elevate your TV to a higher resolution, please do and upgrade it to 1080p for the best results.It is also an appealing upgrade to current ps4 owners; for anyone who doesn’t own a ps4 and wants to get one at a lower price, the ps4 slim might be a better option.

How To Select a Perfect And Affordable Soundbar For LED TV?